Back in March, I developed some really significant pain in my knees - typically, I carried on running on them, until I got to the stage where I could barely get around the block and I was in pain everyday. It was so frustrating, as I'd been having coaching from Lindley Chambers, at Challenge Running since October, my fitness and pace had been improving well, I was really pleased with my progress - but the time came where I realised I just had to stop, rest and get some help.
I saw the physio, and got my diagnosis - in both knees, the cartilage was degrading behind my kneecap and the tendon degrading in the front - patella tendinosis. The cartilage issue wasn't causing the pain though, it was the tendons.
The physio was confident I could get back to running pain free, and although I did still take part in a marathon a couple of weeks after first seeing him (which was a LOT of walking, finishing in 6:10) I then started a recovery programme. Exercises, lots of rest, collagen supplements, more rest, more exercises.
Fast forward 6 months.
I started coaching with the legendary Mimi Anderson, who has been gradually helping me build back some base fitness after the time out I needed for my knees, and helping me through a block of training to prepare me for the virtual London marathon, that I planned to run at Suffolk Running Centre's Delham Kiln marathon. Mimi convinced me to cancel all my other race plans, and just aim for this one.
Yesterday, I ran it.
In the wider scheme of things, it wasn't that fast - my race result for Delham Kiln is 5:14 (and a couple of minutes longer for London as the app didn't think I'd quite run far enough and I had to go back out). However, it's the fastest marathon I've run since Windermere back in May 2018 and i'm really pleased! At one point, about 19 miles, I really thought I might manage an even split and come in under 5 hours, but it wasn't to be! Also, my knees, although still always in my mind and occasionally twinging, were essentially fine, and didn't cause me any issues. So, overall, it was a very successful day out.
It's a really lovely course - 2 laps of mostly road, but with a short section through the woods along some very slippery mud, and it's hilly - but in the best way. Long winding downhills, along with some sharp, steep climbs. I couldn't run up those bits and had to walk, but the downhills were perfect. I had the virtual London app playing, with the recorded cheering every few miles, but my run couldn't have been more different to "THE" marathon. Not one supporter out on the quiet little Suffolk lanes (except for the RDs vehicle driving past checking on us), CPs were a water container on a lonely table every 6 miles, and I spent 90% of the run on my own, although the loop ended at the start/finish so there was some cheering as I arrived there.
Thoroughly enjoyed myself though, although very frustratingly I had left my packed race vest at home (sat by the front door, waiting to be collected) which had my water bottles and all my snacks in. It meant that I had to run carrying a large bike water bottle that I'd found in the car, and I didn't have any food with me - I definitely started to notice the lack of nutrition in the last few miles and even got a bit lightheaded. A lesson learned in organisation I guess, but it doesn't beat the time I went to a marathon and forgot my trainers!
I'm always going to have to manage my knees, particularly with the cartilage problems that are still to really appear, but for now at least, it seems I can start seriously planning for a return to ultras. 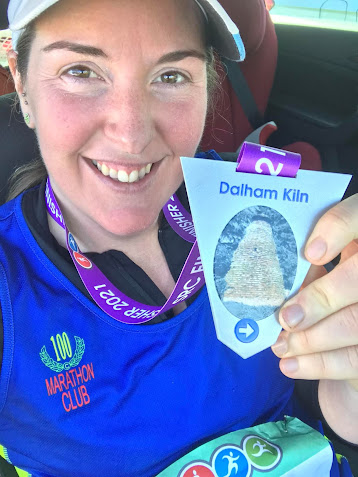