I ran a marathon yesterday (no.106) but my first "official" 26.2 event since August 2019! I have run an ultra in the year in between, at the brilliant Country to Capital back in January, and have also taken part in a couple of virtual events during lockdown with Centurion which I really enjoyed, as well as two 20 mile races so I haven't been totally away from things...but this was the first in person, real life MARATHON.

I had signed up for the virtual London Marathon (an unexpected chance to be involved in my 5th London, even in these very strange covid circumstances, and originally to help a friend do the virtual event) but when that plan fell though, and as events had started again, I decided to find a real event on the same day. I love the courses that the Sussex Running Centre devise, whether they're trail or road they're always lovely (and hilly!) and so was really pleased to find they were putting on an event over both days of the weekend.

So, at 6am on Sunday morning, I found myself rushing out of the door to drive the 90 minutes up to SRC to run their Clover Marathon, a single lap road course. The weather was diabolic. SO MUCH RAIN as I drove along...but I saw a couple of people out in the streets who had started their virtual London marathons and it lifted my spirits a bit.

Once I arrived (with about 2 minutes to go as usual) there was a covid-safe set up and a staggered start, and all of a sudden off we went, with the London app tracking me, and my garmin as a back up.

It was still raining, a lot.

Within a mile I was starting to hurt and feeling so stupid for not having done any proper training, and for having allowed myself to have got quite as fat as I have. I'm nearly 4 stone heavier than I'd like to be, and it makes running so much harder, trying to drag the extra weight around! But, I was there, I had miles to go, so I just had to get on with it.

So, it was appalling weather, with puddles everywhere, and along the few main roads we were on, the risk of getting splashed by passing cars. Soaked through. But, it was really well signed, generally on quieter country lanes through some of the prettiest villages (with the biggest houses!) and it was just a case of getting my head down, and ticking off the miles. The London app came with cheering every mile, and I had either Paula Radcliffe or Steve Cram in my headphones giving me encouragement and advice. I though it was really annoying to start with, but as the time wore on, I actually looked forward to them appearing each mile. Made me laugh when at 21 miles Paula Radcliffe said it was important to keep fuelling, and suggested we should have a gel or some jelly babies - I'd just polished off a flapjack. Guess I'll always be more of an ultra runner than a marathon runner!

I saw very few people during the race, as with the staggered starts, there just wasn't much cross over at all and it was pretty much like doing a solo run. Even the checkpoints, where usually you'd have marshals, someone crossing your name off a list, filling your bottles and providing lots of food, were now reduced in the Covid world to an unmanned table, and a tank a water to fill your bottle every 6 miles or so. 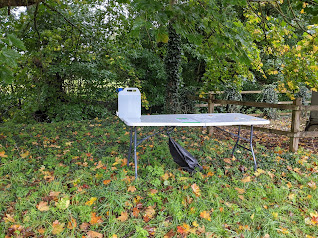 The weather was still awful.

The course was pretty hilly and I walked a lot, but before I started, in my mind I knew I'd be happy with a sub 5:30 run - with very little training, and all the weight I'm carrying, that seemed reasonable. The last few miles seemed to take absolutely forever though, and when I ended up running down a muddy, slip sliding track in my road shoes, I was a little worried I'd gone the wrong way, and that I'd miss my target. However, it was a very brief section, and my goal pace had been pretty much spot on the whole way round, so I ended up finishing in 5:24. Happy days! 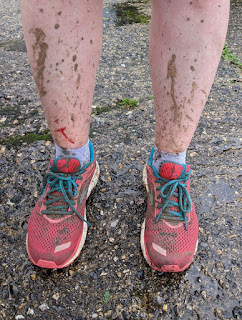 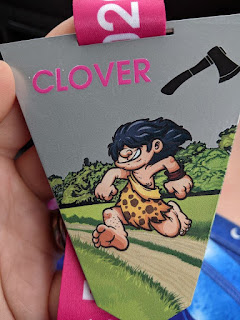 Drenched, aching, but pleased with myself - I collected my medal (no one can hang it round your neck anymore) and discovered loads of welcome snacks in the race goody bag. I'd enjoyed being out in the countryside for all that time, away from the chaos of home - just such a shame it hadn't been a bit dryer! But all in all a positive day and it was lovely seeing more London runners on my way home, who I beeped and cheered out of the car window.

I'm hopeful though that my experience yesterday is the wake up call I need. I love marathon and ultra running...but when you're fat and unfit it is much less fun and much harder than it needs to be. I really have to start training more consistently and try and get back to some sort of normal weight! 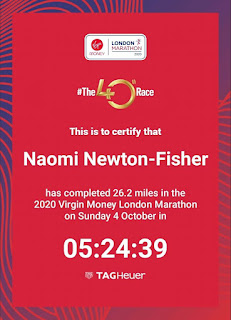