Francis is on sabbatical at the moment and is looking after the girls full time, while I'm at work. This means that when I race I tend to feel really guilty that Francis is with the girls on his own for yet another day. I'm incredibly grateful for his support so I can carry on taking part in events...but it means that I tend to focus on very local races at the moment. So when I saw there was a marathon being held up and down the Southend Pier, just 15 minutes from my house, I thought I should take advantage and sign up. Not only that, this would be a world's first - the first marathon over the sea, along the world's longest pleasure pier. Exciting stuff!

Except it wasn't really.

From social media reviews I think most people seemed to love the marathon, and will be returning next year, but I struggled. It was lovely to catch up with friends, and towards the end of the race in particular there was a developing camaraderie between those of us who were a bit slower and still out there, but after the first three laps which were quite fun, I stopped enjoying myself. I knew before I started though that this wouldn't be a race I'd be repeating - I'm not a fan of laps, especially really short ones (1.34miles up the pier, 1.34 miles down the pier) and the weather wasn't up to much - a bit cold, a bit drizzly.

The pier isn't very inspiring either, and although the train that was running along beside us was a bit of a novelty, all in all I'd say it was a dull five hours. I envied the faster runners and it was great to see them as they lapped me (frequently!). The winner crossed the line in 2:48, an incredible 6:26/mile - inspiring to see proper running! The weather did improve though - by the time I finished it was glorious blue skies and sunshine...and in hindsight, maybe I'm so grumpy about the race because I was feeling so unfit. I hadn't run a step since the St Peter's Way two weeks earlier and by mid-way through I was hurting. Nothing really hurt at SPW, well not really and not for long, but my body was aching and creaking and generally I was pretty uncomfortable after only 15 miles on the pier. No undulation, no change to pace or rhythm unless I walked, and a lot of very solid wooden boards that at times made it feel like we were running on concrete were not the best combination for someone who really wasn't fit enough to be there. "Must do some training" needs to be my new mantra if I'm going to fare better at my next race! 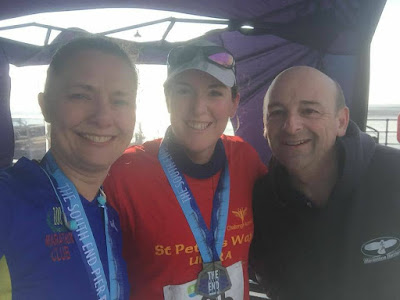 Leaving my grumpiness aside, the organisation and the event team couldn't be faulted - excellent aid station, beautiful medal, really friendly marshals. Added to which, because it was local, and laps, Francis drove down to see me with the girls and it was a lovely surprise to see him walking up the pier as I ran down.

So, race #97 done (officially marathon/ultra #94) so another one down and closer to my 100th, and the bigger achievement of 100 official marathons that will earn me my 100 Marathon Club shirt. Hopefully that'll be October at Centurion's Autumn 100 miler. Now for that, I really am going to have to do some training: 207 days to go and counting! 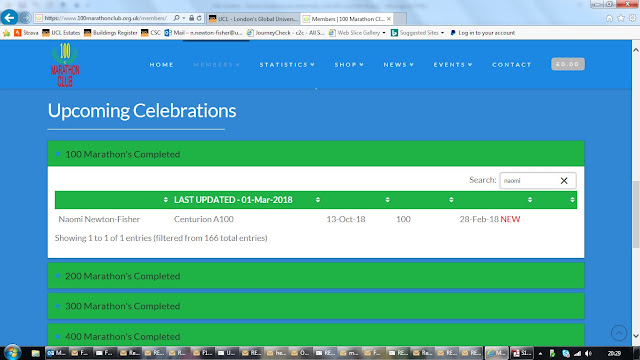