My first baby purchase, to go with our first pictures from my scan yesterday, at 13 weeks 3 days.

It's going to be at least a year until our twins are big enough to wear these babygrows...but I just couldn't resist.

Many thanks to Centurion Running!! 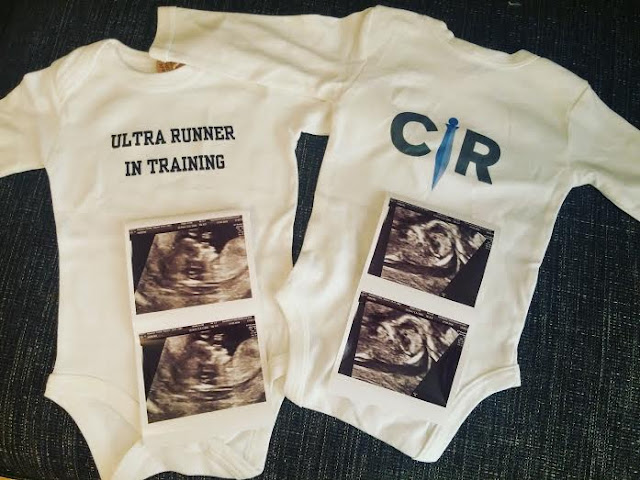 For the last ten months, my goal race has been the 147 mile Viking Way ultra.

So many of you supported me in this most crazy of goals, seemingly equally impressed with the scale and challenge of the event and with my evident madness in wanting to take it on. I really appreciated the belief that everyone had in me! My training was going well, and I was feeling very confident about how I was going to do in the race.

But, I decided not to run - I dropped out the week before the race.

I volunteered to crew instead, and spent the Saturday evening and night stood in the cold, the wind, and then the rain, following by a bright and sunny Sunday morning, thoroughly enjoying myself, trying as best I could to help some of the most incredible, hard-core runners I've ever had the pleasure to meet. It convinced me, that one day, I would go back to run the Viking. It is a truly epic race.

Well, here's the news...Francis and I found out that I'm pregnant!! :D We've been married for three years now but together for ten - we're so excited about this next adventure! But if that wasn't news enough...it gets more exciting...we're having twins!!

We now know that I ran my last race, the fabulous, best 26.6 miles I've ever run, beautiful Larmer Tree Marathon, while in the very early stages of my pregnancy, back in February. It was too early for a positive result on a pregnancy test at the time but I definitely suspected, and it was tough! It's quite a hilly race (2,433 feet elevation gain) but even on the flat sections I found myself a bit breathless, struggling more than I'd expected to, and walking a lot, finishing in 4:58. I loved it though and I am very happy with the concept that it was baby's first marathon! However, it showed me that never mind the inherent risk to the pregnancy, it would have been absolutely impossible for me to run 147 miles. Feeling sick and tired before you even start running really wouldn't have helped either!

Although incredibly happy about the double baby news, I'm disappointed to have missed Viking Way, and I've also pulled out from the other big races I'd planned for this year - GUCR and the Centurion 100 mile Grand Slam, and obviously wont be hitting my 100th marathon in 2016 as I'd planned. I doubt there are many who understand this but after so much thought, preparation and expectation, I've found it a bit hard to get my head around the fact that I'll not be running these races. I've volunteered to crew them instead, and will try to make sure I stay part of the race scene that has become such an important part of my life.

I've also found, that despite my strongest intention that when I fell pregnant I would be one of those women who ran all the way through, I have found myself unable to run these last few weeks. The exhaustion that seems to come with growing twins has left me wiped out after a day at work, and needing to rest after a walk, never mind anything more strenuous. I've decided though not to worry about that and just enjoy my pregnancy and see how things go over the next few weeks.

We had the first scan this week, and the babies are due at the end of November. We've started telling friends and family, and although I know it's earlier than most people would share the news (we still have weeks to go until the 12 week milestone), everything looked good on the scan, and hopefully all will be well with them both.