It's been ages since my last post (over 10 weeks) and I've completed a few events in that time, so here's a quick update: 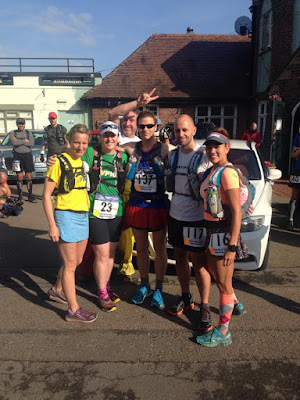 The Stour Valley Path 100km.
This is a race that I absolutely loved last year - it's a fantastic route and the marshals and aid stations are exceptional. I did pretty well, and have been looking forward to having another go ever since. The race director, Matt, convinced me to start in the second wave (there's a 7am start and a 9am start) as only people who started later would be eligible for prizes! I was third lady last year, so there was a possibility that would be me. The later start made for a very tough race though - I was a bit out of my depth, not really fast enough. I was chasing cut offs the whole way through, and was being chased by the sweepers.

I managed to fall over at one point and hit my head, giving myself a decent headache and a bit of a black eye which didn't help matters...but I was very well looked after by a fellow runner, who ruined his race time by hanging around with me and making sure I was alright. It's that sort of thing that just goes to show was a brilliant sport this is!

My late start also meant that I finished in the dark, whereas last year it was still daylight, which I think contributed to me going the wrong way a few times, and I spent the last 5 miles or so practically walking with another runner whose headtorch really wasn't sufficient for pitch black trail running, so he could use my light. So, it wasn't the fun experience that I'd had the year before, and I was slower, but by default, as only four women started in the 9am wave, I managed to take home a trophy for 2nd Woman after finishing in 13:21 and it's one of the loveliest trophies I've ever seen. 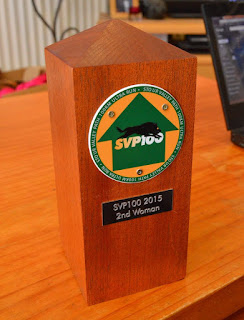 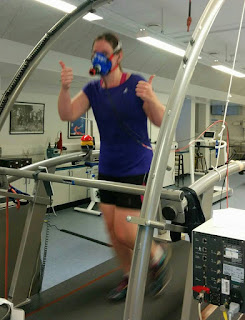 I volunteered to be a participant  in a PhD study being conducted at Kingston University into the physiological effects of ultra running. I did a VO2 Max test, had bloods taken, saliva tests, went into one of the chambers that accurately measures your body fat percentage, and then ran for 40 miles on a treadmill, while all sorts of other statistics were measured - pace, heartrate, calorie and fluid intake, weight loss during running, and I'm sure there were more.

It was an incredibly interesting thing to be involved with, and I'm very keen to see the results of the study, but running on the treadmill was absolutely horrendous. I really struggled! There was no natural light in the room, I was too hot, I was bored, my legs hurt, it was just so tough.  It was meant to be a 50 mile run but I took so much longer than I expected I had to call it a day at 40 so I could get home.

Having not run on a treadmill for some years, I don't think I'll be getting back on one any time soon! 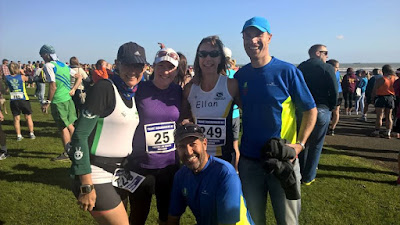 Kent Coastal Marathon.
I was dreading this race, as I knew how unfit I was, and I've never been a fan of the course, but actually it turned out to be one of the most enjoyable marathons I've done. I paired up with my friend Rachel, who was returning after some time out too, and we covered the full 26.2 miles together, although lots of other friends ran with us along the way as well.

The weather was gorgeous, the sea side was absolutely picture perfect, and we stopped for ice-creams a couple of times, and just laughed, chatted, ran and walked the whole way around. Consequently, it was one of the slowest marathons I've ever done, at 5:31, but it was so relaxed and so much fun, I just didn't care about the time. 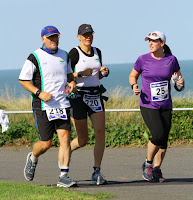 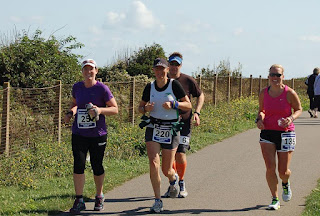 Our South American adventure
Francis and I went backpacking in Peru and Boliva for three and a half weeks and had an absolutely amazing time. I only ran once, in Lima on our second day after arriving, and it wasn't the prettiest 5 miles I've ever done, but more than made up for it when we went trekking in the Andes, over the Salkantay mountain pass, to Machu Picchu, which is about 38 miles. We also climbed the mountain at Machu Picchu (Waynapicchu) as well as trekking through the Amazon in Bolvia. So altitude, heat and humidity training!  Most of our trekking in the mountains was at about 3,500m, going up to 4,500m, and it was tough - I've never been at altitude before - but it was such a great experience. It's a stunning part of the world! 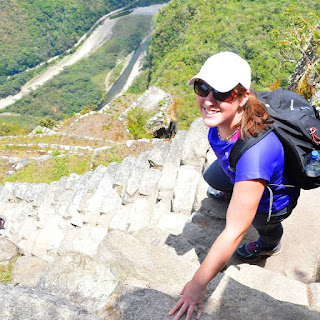 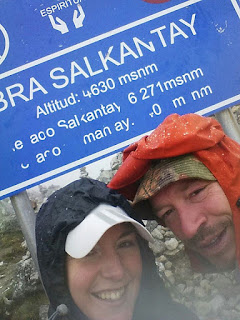 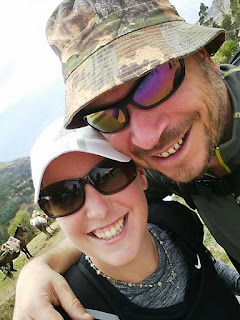 Chelmsford Marathon.
This was yesterday's race. I had hoped that our exertions on holiday would be good alternative training but unfortunately it turns out trekking isn't the same as running, as I found the marathon tough going...in fact I thought I was going to die at any point through the first 6 miles. Luckily, my body started to remember how to run and breathe at the same time, and I was much more comfortable at 10 miles, and by 18 miles I was starting to enjoy myself and was running pretty strongly. There were quite a few friends out on the course which is always great, especially as some were returning well from injury, and some ran absolutely brilliant times including a couple of PBs, and I spent a lovely couple of miles at the end running at chatting with 100 Marathon Clubber, Anna.

Although I had a negative split, it took me 4:44 to finish. I'm aching this morning too which is very unusual for me after a marathon...it's just a sign of no training so need to rectify that! 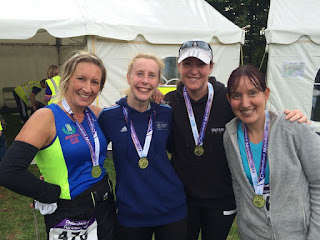 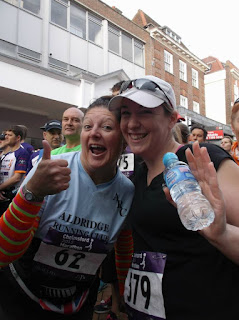 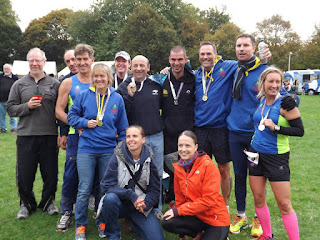 Chelsmford was also my last race in my "24 ultras and marathons in 12 months" challenge, that I have been doing to raise money for the Saint Francis Hospice who helped us when my wonderful father-in-law Roger was diagnosed with cancer last year, and then passed away less than a month later.

I'm really proud to have completed this challenge, and to have included such big races (namely TP100 and GUCR), and of course glad to have raised some much needed funds for the hospice to say "thank-you". The total currently stands at £2,069 plus gift aid.

If you'd like to donate, there's still time to support me and the hospice - my justgiving page will remain open until early December.
﻿