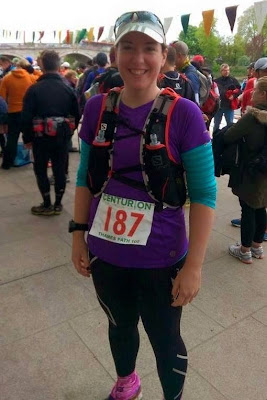 Last year, writing my post-TP100 blog, I was absolutely filled with positive emotions. I was totally elated, astonished that I could have enjoyed the whole experience so much, and to have finished in a totally unexpected time of 22hrs 20 minutes. I was convinced I had found my perfect race, and wanted to try and capture as many details of the event as I could. Fast forward a year, and this blog is harder to write. My experience of the race was totally difference.

As you may know, I've really struggled with training recently and motivation for anything to be honest, and I haven't put enough work in. I'm at least half a stone heavier than I was for the 2014 Thames Path, despite constantly promising myself to start eating well, to get to a more suitable race weight, and I just haven't been able to find the drive to properly prepare. I also think that having had such a great run last year left me a bit blasé about how hard 100 miles was going to be. To give you an idea of my lack of training, since the first week of 2015, my average weekly mileage has been just 33 miles, ranging from 14 miles to 70 miles a week. That compares with an average of 43 miles a week in 2014. I have managed to get some decent ultras done though which has helped, and I've been swimming and cycling too, which is new for me, so maybe the cross training has gone some way to mitigating the lack of running.

The other difference going into this race, was that I really believed that I was going to be able to beat last year's time, and so right from the start line I approached the race differently - rather than just going out there to see what happened, I felt more pressure to achieve the time I wanted, although with less excitement than in 2014. I was even carrying a little pace card! One thing that was the same was my upmost confidence that I would finish.

But anyway, race weekend saw me as disorganised as ever but I eventually arrived at the (far too expensive) hotel in Richmond where Francis and I were staying. Franc didn't join me until about 9:30pm, so it was a late but delicious pre-race dinner of fish and chips, before an appalling night's sleep - I phoned the reception desk at 2am to see if they had another room we could move to! It wasn't the best preparation, and Saturday morning soon arrived. While I was still getting ready, Francis set out on his own adventure - he'd decided that if we were all going to run from Richmond to Oxford, he was going to cycle it! No particular training other than the odd bike rides he does now and again but he got on really well and thoroughly enjoyed it :D Not for a medal either - think I should probably buy him one, especially as he has been looking after me so well since I got home. 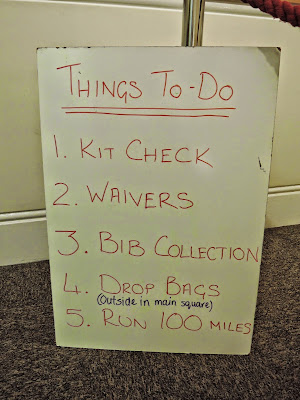 Anyway, I headed down to the TP100 HQ for 8.30ish. Kit check, bag drop and race registration were all seamless, and I was amazed at how many familiar faces there were - every step I seemed to be saying hello to someone, sharing a hug or having a chat. It's such a great community feeling at Centurion events. My friends Steph and Keith had also made the journey down to Richmond which was lovely and I really appreciated seeing them.

Soon though we were off and running, and the journey to Oxford had started.

Long story short...the first 65 miles were absolutely brilliant. I felt strong, I was running (and walking) to my schedule to meet my target of a sub-22:20 race time, and I had forgotten just how lovely the route along the Thames is - sections of the river are absolutely stunning. I met Steph and Keith again for a quick hello, and shared miles with friends, some already met, some previously I'd only known on Twitter, and some newly made, while I sadly saw others drop out. I saw a pack of foxhounds being exercised by the river, and I stopped a few times to stroke the more friendly dogs out for their Saturday morning walks - each of them put a smile on my face :) 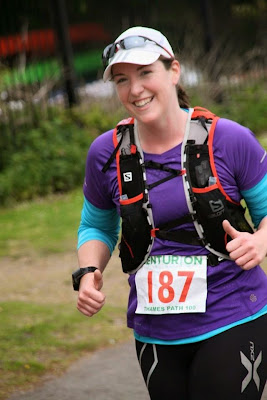 The weather was warmer than expected and I was overdressed - leaving one checkpoint I was suddenly blinded by the sweat pouring off my face. However, I made a very conscious effort to eat regularly despite nausea from relatively early on and I drank to thirst, adding electrolyte tablets to my bottles at every aid station, and so was able to cope with it. Thanks to Fiona who took it upon herself to look after me (and between her and Sue, it seems half of the other runners out there) I even had some particularly delicious pasta at the aid station in Henley - was surprised how easily some hot food went down! The darkness fell, and that was fine too - so many of my training runs are done at night so I'm very comfortable with it. Then we had the excitement of Susie, Shaun and Paul and the enthusiastically decorated aid station at Wokingham, and although the section through Reading was a bit disconcerting as I ran alone past groups of drunk lads - I was soon back into the countryside.

Unfortunately just before Whitchurch aid station, at 66 miles, I got a tiny bit lost (there seemed to be much less route marking than last year) and my headtorch died, both at the same time. The spare battery pack I had for my headtorch provided a much dimmer light than I had been running with, and these things combined put me in a foul mood. It doesn't take much. After leaving Whitchurch, I slowed down and starting walking more often, having a real pity party for one and feeling decidedly fed up, all the way to Streatley five miles later. After that, things did improve, but I'm not sure I ever really got my head back in the right place.

By the time I got to 80 miles, although I wasn't feeling too sorry for myself any more, my aimed for time had gone out of the window, and my body was starting to hurt - paying for my lack of training. My quads were particularly sore, and my feet felt pretty shredded - the persistent rain we'd had from the early morning wasn't helping with that, and I'd also had a couple of hot spots from about 20 miles but hadn't made the time to sort them out which was obviously a mistake. But, I plodded on, very pleased to still have a working watch, my Suunto Ambit, to give me some guide as to where I was, as by this stage every mile felt like it was three! As I'd been so careful abut eating and drinking thoughout, I didn't have to deal with the confusion that troubled me last year, and I felt much clearer about the whole thing, so the fields leading up to Clifton aid station weren't as soul destroying! I left Clifton at 85 miles and started being passed by people - and that was quite soul destroying. I wasn't feeling great again, and was telling myself that I would never do another long run in my life. 100km was going to be my limit from now on! Why on earth would anyone put themselves through this? This was an absolute hell. I was feeling very despondent too...I even sat down in chairs at the two last aid stations - something I never let myself do as it doesn't achieve anything as far as I can make out, except kill time and make you stiffen up more!

Eventually I got to the last couple of miles, and managed to start running again - clearly I was still physically capable but my mind just hadn't been strong enough. Seeing the finish gantry through the trees from the path was so wonderful...and then there's the red tape marking the last 100 yards, and the crowd cheers, and then you've finished, and it's over. I was so incredibly relieved.

I was pretty dazed by the end, but had hugs and food was brought to me and lots of familiar faces made it all a bit more reassuring. I went to get changed out of my wet gear (oh, yes, didn't I mention? It rained, and rained, and rained), and managed to fall asleep, sitting up, in the changing room! I was woken by Karen who'd come to find me, as Francis and Chewie had arrived to take me home.

My placings improved throughout the race - I was almost dead last after queuing to get through a kissing gate at Richmond, 154th at the first aid station, 122nd at half way, finally finishing in 94th position out of 235 starters, and as 8th lady out of 35, in 23:19. So good enough to have earned the coveted sub24 "One Day" buckle, and a decent time, but I can't help but be just a little disappointed and it just makes me wonder what could I achieve if I was running lighter, and doing proper consistent, 50-odd mile training weeks for a few months. 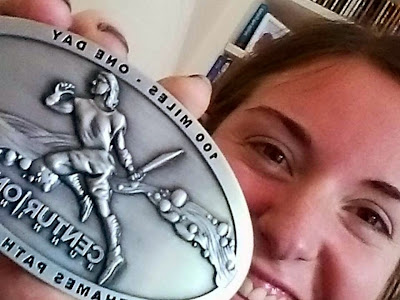 Don't get me wrong though, I am proud of myself and am very happy to have added another buckle to the collection - maybe it even means more when I've had to work harder for it, and I know I finished in a time much faster than I deserved on the training that I've done.

After the race, I felt like I'd been hit by a bus - absolutely physically horrendous - as well as very tired, and sick with no appetite. I was convinced that I should pull out of GUCR because I just wasn't capable. Thankfully, this morning, the day after the race, I feel better - stairs are still a bit of a struggle, I'm making some very strange noises when I get out of a chair or bend down, and I'm still sore, but my appetite is back and I can move more easily. Let's not talk about my feet though!

I am still on the verge of withdrawing from GUCR, as I realise now how grossly undertrained I am. I had been worried that 3 weeks wouldn't be long enough to physically recover after the Thames Path, but now I wondering if it's also not long enough to forget the pain. I'll see how I feel over the next few days.

Now last, but by no means least, I want to say a thank you to the aid station volunteers, all of the other runners' crews and the whole Centurion team for making the weekend possible, for being in such good spirits the whole way round and for being so genuinely caring about our wellbeing. Some of the food on offer was inspired too - I loved all the fruit, and particularly liked the cheese and pineapple on sticks! Thank you all!!
at 16:13