Following my own path

I've had a bit of a revelation.

After a couple of years of constant racing, and racking up crazy numbers of marathons and ultras, I've come to realise that I've lost sight of what’s important to me about running – really enjoying it!

I think it started in December, when I signed up for coaching with Robbie, and he suggested I drop out of a few of the races I had coming up, as with the frequency that I’d planned to race in 2015, there’d be no time for proper training. So, I followed his advice and with a heavy heart withdrew from Country to Capital. It got me thinking about the importance of races v training. To a certain extent, I am surrounded by friends who race near on every week – people who achieve the most extraordinary things in marathon and ultra running, and I think I've felt I had to try and keep up with them. To try to do what they did if I wanted to be considered a “proper” runner.  But this weekend, my outlook on racing, and how I approach my running, has changed.

My mum and I attended a funeral on Saturday, of a family friend, Tanya. My mum had known her for 40 years, and Tanya and her late husband Ugo (who ran a local nursery on a beautiful plot of land) were an intrinsic part of my childhood and teenage memories, particularly at Christmas when we would go and chop down our Christmas tree from their nursery and then catch up for a chat in their wonderful home, that they had built themselves.

I was so sad to hear that Tanya had passed away after being diagnosed with leukaemia in June, but it was a privilege to be able to attend her funeral. It was a humanist ceremony, and so more of a celebration of life, and there was laughter along with the tears. Tanya was buried next to Ugo, in the woodland on their land, where her daughter now lives. It was a wonderful ceremony - very moving, and sad, but full of warmth and memories of a life truly lived to the full. Without doubt Tanya followed her own path and was a strong, independent and adventurous woman - a role model.

The following morning, I went for a trail run with Nicki. We had been for a run the weekend before, with another friend Lindley who as well as taking part in some of the toughest races going, also organises trail events, including the St Peter’s Way 45 mile race, and it was the route of this event that we were recceing. So, Nicki and I were out in the countryside in the winter sun, up to our ankles in a hundred different types of mud, trying to follow the SPW route without getting too lost, through the woods, across the fields, and nearly to the coast. It was a brilliant day, and reminded me just why I enjoy running – we were very slow with all the mud, and walked often, but our 19 miles were rewarding and fun.

When I got home, I starting reading the Facebook posts from friends who had been running the Viking Coastal Marathon Double this weekend down in Kent, put on by Traviss and Rachel, and a better organised and friendly event you can’t imagine. All of their races are absolutely brilliant from that point of view and I’ve done quite a few of them. I did their summer Viking Coastal marathon along the same route last year and ended up getting injured, but even so, am somewhat surprised I hadn’t signed up for the winter version this year, as so many of my friends were running it, and that seems to have become my main criteria for entering marathons recently.

Usually, seeing everyone’s posts, I would feel sad not to have been there with them, and disappointed that my day's running hadn't resulted in a medal (Traviss and Rachel’s medals are legendary!) or another race finish to count towards my 100th Marathon. But yesterday was different.

I had spent the day thoroughly enjoying the experience of being out on the trails, and I knew I wouldn't have enjoyed the marathon as much because although there would have been many friendly faces, it would have felt very social, the medal was lovely and the aid stations well stocked, the straight, dead flat tarmac route with four out and backs along the sea front just doesn’t tick enough boxes for me. For the first time, I had the realisation that a training run could be more rewarding than a race. I’ve realised that I’ve got to stop chasing my numbers, and focus on what makes me happy with my running and what motivates me most - that’s new experiences, being out on the trails, feeling I’ve achieved something, enjoying the scenery, and when I race, being strong but rested enough to finish strongly.

Lots of people I know have recently reached the incredible milestone of completing their 100th Marathon and received the hallowed shirt and I think I’ve fallen in to the trap of thinking it’s important that I join them as soon as possible. This means I’ve been doing races for the sake of the numbers, and not for the love of them. I’ve enjoyed most of them because I was able to share the day with the other runners, but more often than not, they weren’t the rewarding experience that I wanted or the type of race that really motivates me.

So, I’m going to change the way I approach racing.

I’m not going to sign up for events just because I think I should do them to add to my numbers, or because I have a month without a race booked so I might as well do another one, or to try to catch up with those who are running more races than me, or who have already reached their 100th marathon. I’m attempting some very challenging races this year, and trying to fit lots of other events around them for the sake of adding to my tally is, essentially, daft. I don’t need to fit in everything I want to achieve in running by the time I’m 35 – I want to be a runner for the rest of my life. I have another (fingers crossed!) forty plus years to fill with challenges and new experiences out on the trails!

Obviously, I’ll continue to raise money for the St Francis Hospice with the races that I will do over the next year, because it’s an incredibly worthy cause and supporting them means a lot to me, and I want to continue to run in memory of my father in law, Roger. However, I believe that the magnitude of some of those races is sufficient to raise money on their own – I don’t have to fit in 24 events in 12 months as well, and I don’t have to reach my 100th marathon in the next couple of years. With this in mind, I plan to withdraw from some events, and to just focus on the ones that I have been particularly looking forward to, and that are going to give me real satisfaction when I complete them!


I will train well, I will race strong, and I will enjoy my achievements. They will not be diminished by being more spread out than the achievements of my friends. I don’t need to emulate other runners around me, who are following their own, very personal journeys, with their own motivations. I will follow Tanya’s example to be my own person, and follow my own path.

To be the best I can be

I can't believe it's already 2015. Time passes so quickly it's frightening, but I love the fact that through my running I really feel that I achieve something special each year. I do need to remember though not to compare myself to other runners' achievements - we're all on different journeys and although some of my running friends have completed many more races than I have, or are much much faster, my achievements are still worth being very proud of.

I had a look at last year's "Year End" post, to see what goals I'd set myself for 2014. Essentially I wanted to be more dedicated to my training schedule, to stop running junk miles and put some structure into my runs. I felt that by doing this I would achieve my main race goal of completing Thames Path 100, and to run enough marathons to join the 100 Marathon Club as a Wannabe.


Unfortunately I didn't really manage to stick to my training schedule - my running was as haphazard as ever - but I did complete my other goals, the Thames Path 100 and my 50th marathon. In fact, I'm still incredibly surprised at how well I did at TP100, finishing in 22:20, as 4th lady, and feeling (relatively) strong throughout...until collapsing abut 20 minutes after crossing the line and ending up in hospital. But glossing over that, I did love the experience of running 100 miles much more than I had expected. 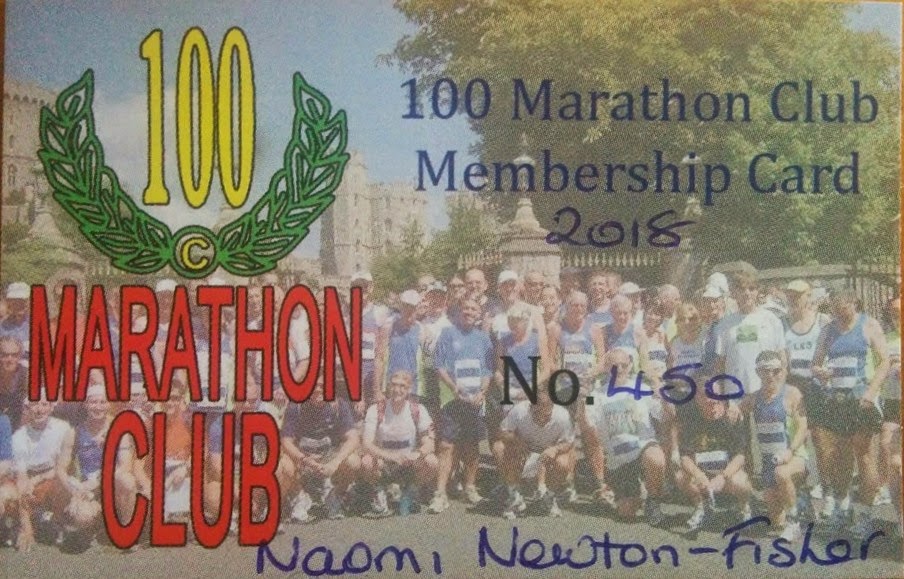 As for my other goal of reaching marathon number 50, I did that, and received confirmation of my Associate membership of the 100 Marathon Club in June. I'm so proud to be a part of the club, and to be friends with so many amazing runners who inspire me every day. Getting full membership and being able to wear the shirt will be incredible...but that'll not be for a good few years yet. I finished the year by running my 60th marathon on New Year's Eve at the inaugural Flitch Way Marathon.

So, during 2014, I racked up a total of 22 marathon or ultra finishes and although I didn't enjoy every one of my races, some of them have been absolutely brilliant - TP100 would be top of the list, but Country to Capital, The Pilgrim Challenge, St Peter's Way where I was 2nd lady, the Ranscombe Challenge, the Stour Valley 100km where I was 3rd lady...they've all been awesome I think it's safe to say 2014 is the year I really became an ultra runner.

I've had a few injury struggles but nothing too horrendous, and fingers crossed, with sensible and consistent training, I will be injury free through 2015 although this morning I've been icing my Achilles as it's playing up a bit already! It's going to be such a challenging year - more races than ever, and my A race is GUCR. 145 miles, unsupported, non-stop. Such a classic event - it just sounds ridiculous in it's toughness - but I'm so determined to finish...and I suppose the goal is to finish strong and not end up death marching for the last 40 miles. My other goals for the year are to beat my 2014 time at the Thames Path 100, and to complete an Ironman triathlon. That's definitely a journey into the unknown and it scares and excites me. I think that's got to be the best feeling and it drives me to improve. For the first time, this year I will also be working with Robbie Britton, who's going to help me achieve my running goals - I really believe that his support and direction will be the key to maintaining consistency in training, and through that, I should be able to really achieve my potential in my racing.

When I look back, at the end of 2015, to see how I've done, maybe that should be my main goal for the year that I measure myself against. Hand on heart can I say I've done as much as I could have done to achieve my goals? Maybe that's the most important aim for anyone, to be the best they can be, and that should be my target for the rest of the year.