I've been telling people at work about the 100 miler recently, and most of them have been impressed, although of course, they all think I'm crazy for even considering it! One question I've been asked a lot though, is whether I'm doing the run for charity. I've been saying that I'm not, that I'm just running it for me, but actually, if people are interested in sponsoring me for my run, then I've decided, why not?! Surely I should take advantage of their generosity, and raise some money for an organisation that I think would be a really worthwhile recipient.

So, I'm now going to be taking part in the Thames Path 100 to raise money for charity, and I've decided that I'd like to support Centrepoint, the UK's leading charity for homeless young people.

Centrepoint provides housing and support for more than 1000 young people, aged 16-25, every year, helping them into work and a home of their own. The reason I've chosen them is two-fold:-

Firstly, back in the day when I had a much more chaotic life than I do now, and made very bad choices, had it not been for the support of my family, I could have very easily ended up homeless and I have always been aware of just how close I got and how incredibly lucky I am that they were there for me to bail me out with the rent money again, or to take me back home when it all went wrong. I understand only too well how life can turn upside down, even for someone like me - I was a loved and lucky teenager with a world of support and opportunity. I can't imagine how difficult life can be for children who come from less fortunate backgrounds, or from abusive homes, and how they manage when they end up alone in the terrifying position of having to survive on the streets.
The second reason for choosing Centrepoint is that I will be running through the night during the 100 miler, and when I start to moan about how cold it is, or how I don't like being out in the pitch black, I will think of the thousands of people who every night have to cope with being out all night, because they have no other choice and no home to go to, and I will buckle down and get the job done, knowing that I am supporting at least a few of those people and knowing that I've raised will be making life a little less challenging for them.
Thank you for taking the time to read this post and please dig deep if you'd like to sponsor me, and help make a real and lasting difference to the lives of homeless young people.
https://www.justgiving.com/naomi-runs-100

It's not always about how far you go

Last week was terrible for me in terms of training, and general preparation for the TP100. After the marathon on Sunday, for some unknown reason I just couldn't drag myself off the sofa and didn't run Monday to Friday. My diet was terrible too, and I just felt totally low on energy and motivation.

I'd booked a place for Saturday's day 2 of the Jurassic Coast Challenge - a brilliant sounding event that one year I'd love to run in full - but when I realised that I'd have to get up at about 3am on Saturday morning to get to the start, in Weymouth, on time, I decided not to go. I didn't even email anyone to let them know - just didn't show up, and that's really poor form.

Thankfully, I also had a place booked in the very local Brentwood Half Marathon on the Sunday. Somehow, despite feeling completely disinterested in my running, I decided I had to make the effort and get to the race, even if it was just a half and I didn't think I'd really enjoy it, what with the predicted rain, the large number of other runners (relative to the small events I usually take part in) and the all-road course. But it's my local race, and I couldn't think of a decent excuse not to go.

The Brentwood Half was the first race I ever took part in, back in March 2008. I finished that in 02:14:16, and although my PB for a half marathon is over 25 minutes faster than that (1:48:06 at Reading in 2012) I wasn't expecting to go much faster than that first ever race time. As you can tell, my mental state was not where it should have been!

Once we started running, I got a bit caught up in the crowd, and was going a bit faster than I thought was good for me even though it was downhill - somewhere in my mind I was thinking I should probably be running about 9:30 min/mile and I was going nearly a minute/mile faster.

So rather than just going with it, I slowed down and plodded on. I kept thinking about how I wasn't really enjoying myself. Everything hurt. The roads weren't closed and the cars were too close. The cheers of the lovely people who had given up their morning to come and cheer us along, for some reason grated on my nerves and I wished that if I had to be running, I could be running on my own. I wasn't in a great place.

But then, just after about 8 miles, I seemed to wake up. Whatever combination of hormones running sets off in your body, they'd finally reached my brain, and I started to feel much, much better about everything.

I remembered what it was all about...what I was meant to be doing...and realised that with some effort I could probably still get a sub 2hr and that at this stage in my running career, there really wasn't any excuse for running slower than that!

So, I started to run faster and get a bit more focused. I started to overtake people, and to be honest, was suddenly amazed at how much I still had in the tank. I'd left it late to go for the sub2, and actually ended up working much, much harder than I thought I'd have to, especially because the last mile or so is uphill. I was really pushing myself. I don't remember the last time I worked so hard for a finish to be honest, and I became absolutely desperate to get the time. I was breathing harder and started to feel the effort - I realise just how much of a plodder I've become and how much more rewarding it can feel to push yourself!

I remember looking at my watch, convinced I should be there, but still couldn't see the finish, and realised I was going to have to really kick to the line. I was overtaking people left, right and centre, and it felt brilliant.

As the finish line came into sight, I could also see the clock. It was counting gun time, obviously, and although this was a chipped race I became determined to not only get a sub 2hr but to get a sub2 on the gun as well.

I felt like I was flying along, and was running at a speed I've not managed in I don't know how long! I made it with seconds to spare on the gun time, and a chip time of 1:58:54 for a Garmin distance of 13.2 miles. As I crossed the line, I wondered if I'd be able to avoid throwing up. What a great feeling ;)

My splits are below, and I'm very pleased with those final few miles and my negative split. It may only have been 13 miles, but I feel like I worked harder than I have done in months, and I'm really proud of myself that I kept it going and got the job done in the end.

Then I ran the 6 miles home.

My most recent race was the Run for Tomorrow marathon, and I had a really brilliant day.

The weather was stunning and the location, Pitsford Reservoir in Northamptonshire, was very pretty with a mix of different views, and a flat route that took us around the lake with a few wooded sections to break up the open paths. I bumped into lots of friends as soon as I'd parked up at the start, and so knew from the off that this was going to be a fun day - the marathon circuit really is so social, and the more races I do, and the more people I meet, the more I love this aspect of running!

I ran the first mile or so with Traviss and got some advice for the Thames Path 100 - he's always such a support and inspiration - before heading off on my own, just enjoying the scenery and the run, and the unusually gorgeous blue sky and blazing sun weather we had. It turned out to be a bit too warm for my liking, and I ended up with quite bad sunburn, but it just made such a difference after the diabolical weather we've had recently. 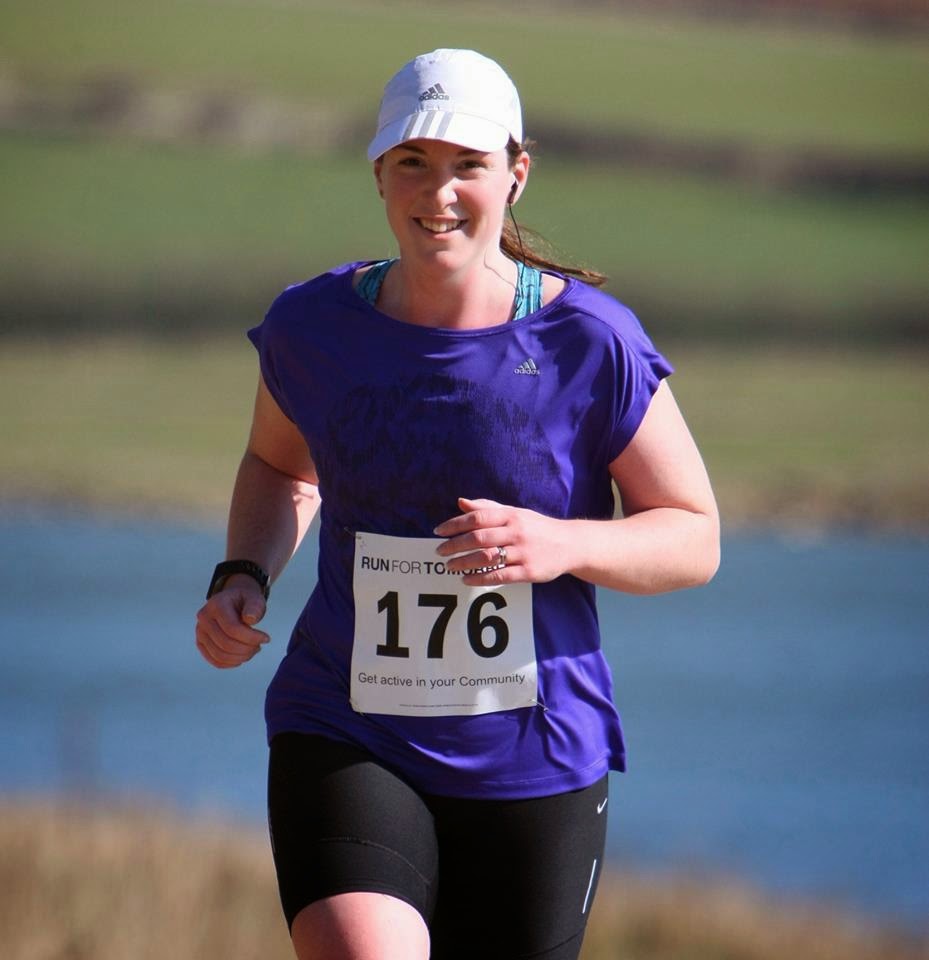 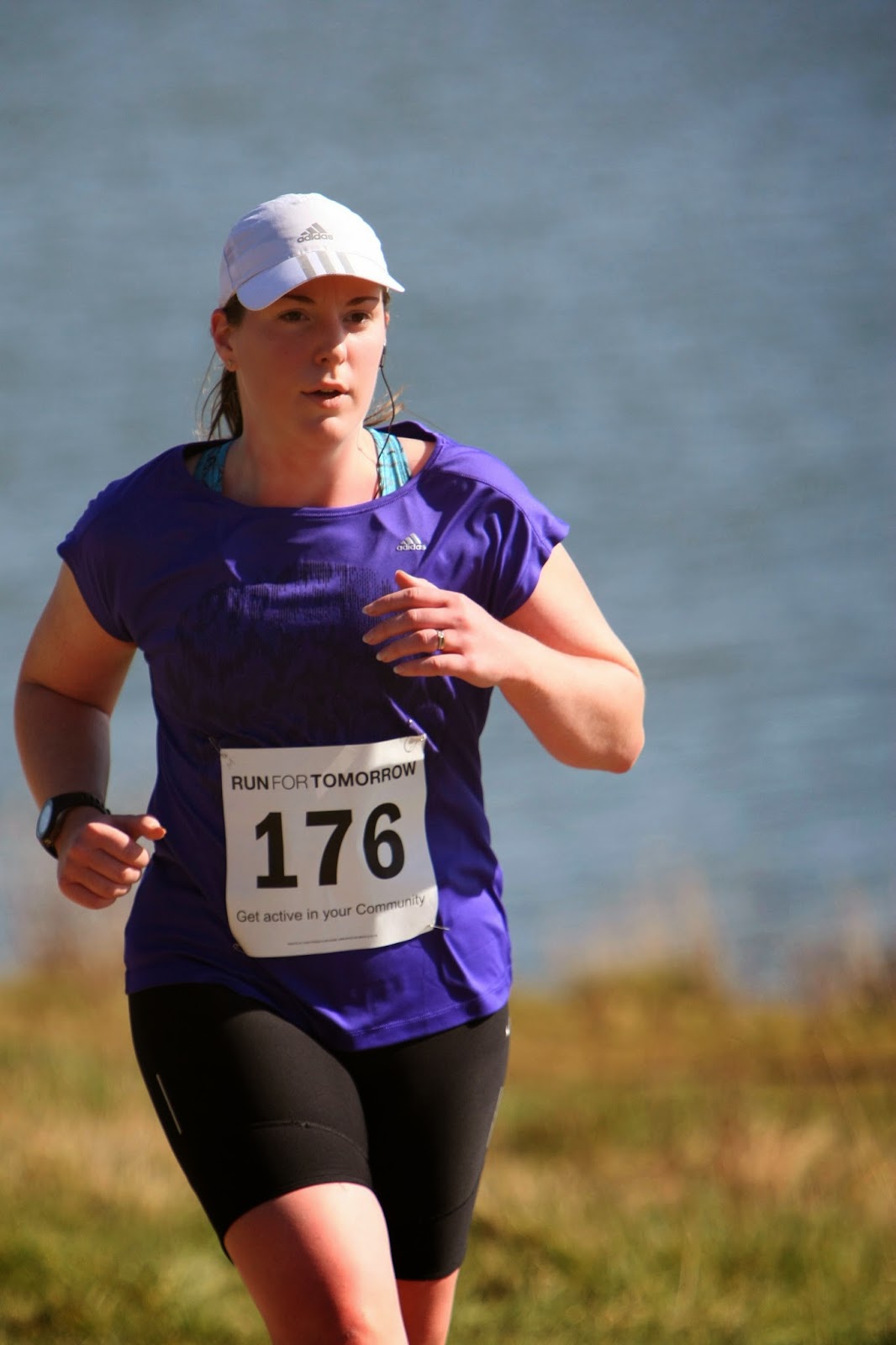 I felt good throughout the miles...all 26.64 of them according to the Garmin...and managed to run the whole way, only stopping briefly at the water stations and was really pleased with how I got on. I've got so used to run/walking in the ultras it did take some determination to keep my pace up the whole time. I ended up clocking my fastest marathon since April '13, finishing in 4:14, and actually felt pretty strong throughout, which I was pleased with as the marathon came at the end of four weeks of good training for me, with mileage of 46, 53, 42 and 50 miles, so it's another confidence boost as the 100 miler draws closer.

However, the best thing about Sunday's marathon was the couple of hours after we'd finished. I think because the weather was so nice, everyone seemed to want to stay at the end, and we lounged around on the grass in the sunshine, laughing, chatting and catching up, celebrating some significant race milestones and clapping in the other finishers as they crossed the line. There was even cake. It was an afternoon that I'll definitely remember.

So, I've leave you with a few pictures of the lovely people I shared the day with...and our great medals! :) 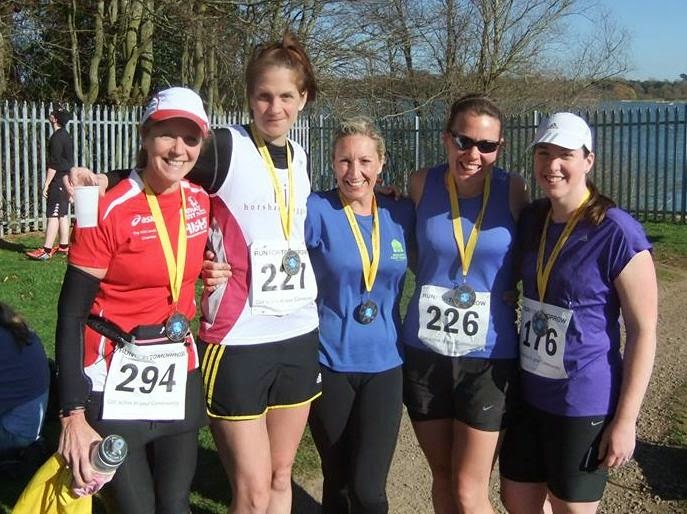 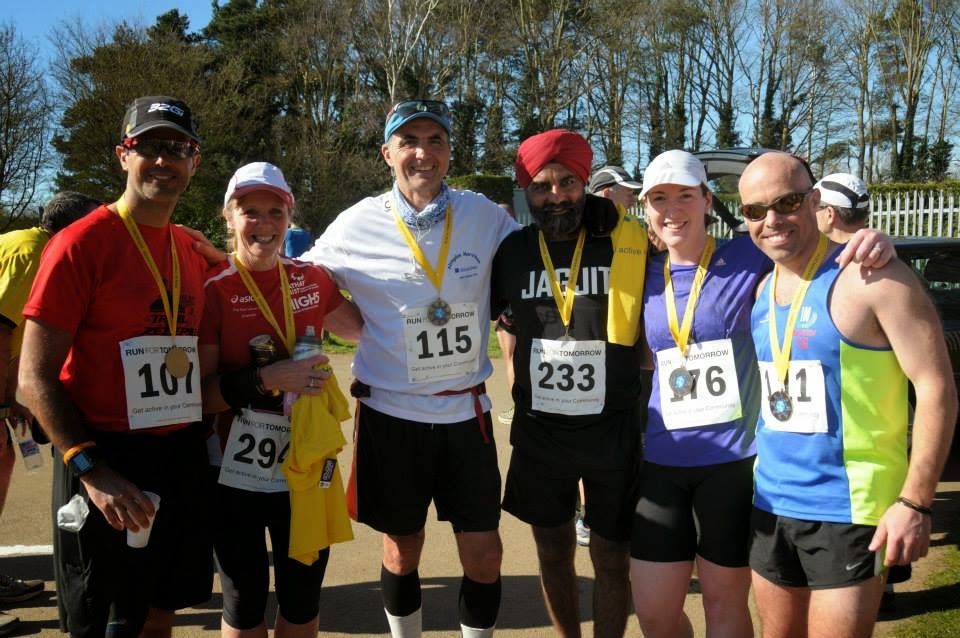 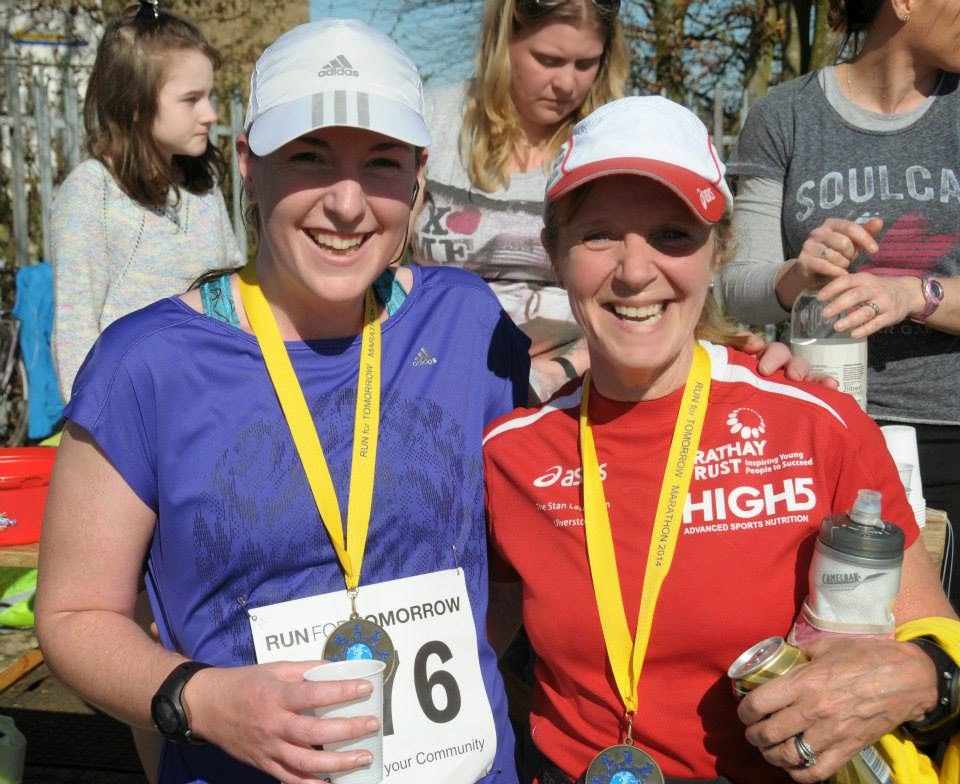 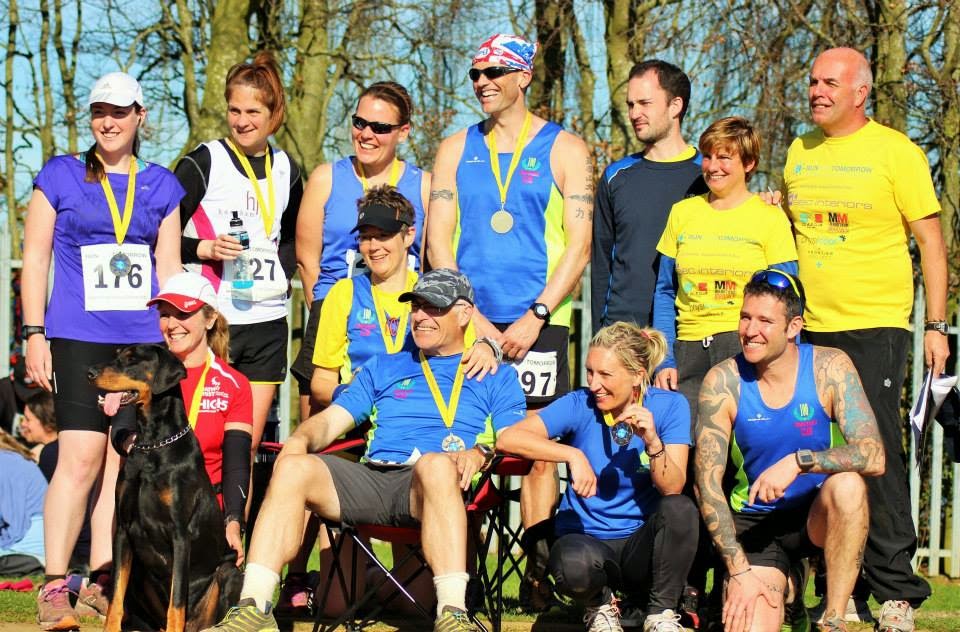 Yesterday, I ran the St Peter's Way 45 mile ultra, following an ancient pilgrimage route in Essex from Chipping Ongar to the St Peter on the Wall church at Bradwell on Sea. I plan to blog about it in full soon, as it was an excellent event, and I thoroughly enjoyed it, but for now, I'll just share my facebook status and the photo of the medal and trophy that I earned!

"What a great day out at the St Peter's Way ultra! Met up with lots of friends, the weather was pretty much perfect, the marshals and aid stations were awesome, the amount of mud was insane, and at one point I found myself wading through a ditch filled with thigh-deep water (because I went the wrong way) - it was a brilliant adventure! To top it all off, I ran nearly two hours quicker than when I did the race last year, finished as 2nd Lady and got myself a trophy :D Thanks so much to organisers, Challenge Running Ltd" 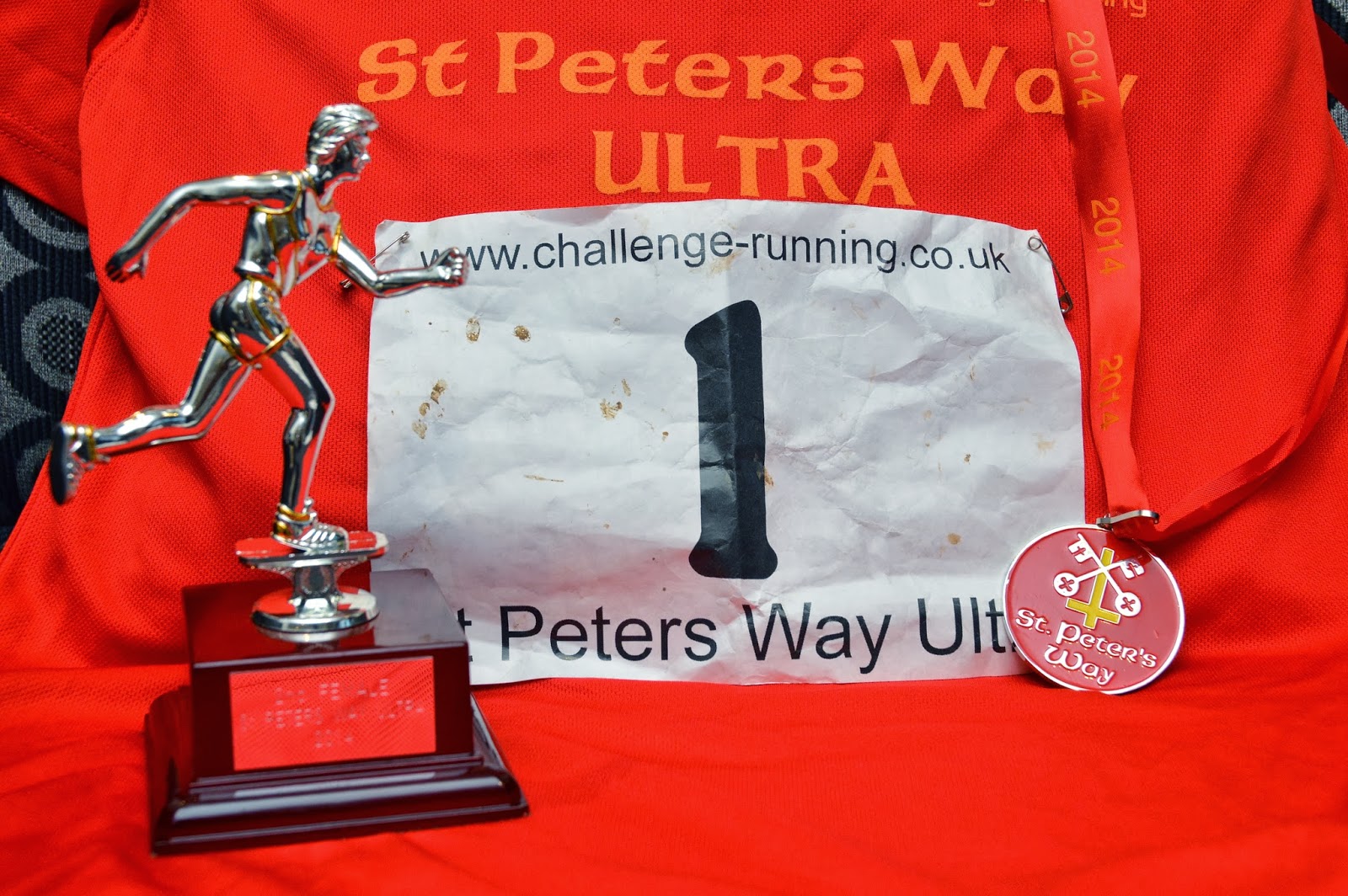