As the Thames Path 100 event comes ever closer, I am starting to believe how real it is, and accepting that I will be taking part in this epic event. It's just 10 weeks away, on 3rd May.


Although I know lots of people who run 100s regularly, and a fair few who run further too, I'm determined not to let that undermine just how big a deal this distance is going to be for me or let myself get complacent. 100 miles. In 24 (and probably a few more) hours. That's a very long way, especially when the furthest I've ever run before, all in one go, is 52 miles.

But I have a plan, and it's going well. I've managed to stay injury free so far this year, am having regular sports massages, and although it's still very minimal, am doing more stretching than I ever have before. After yo-yoing for a few weeks (in fact, my whole life!), I'm now feeling more committed to my weight loss plan that will hopefully see me back at 10 stone by the 100 miler. I've done 3 ultras and a marathon so far this year and am booked up for more too. Between now and the 100, I have the St Peter's Way 45 miler, XNRG's 2 day Cotswold Challenge, which is 57 miles, and 4 marathons, which all just form part of my training and should set me in good stead. I know I'm probably going to be less trained than many others on that start line, but I'm doing as much as I can, and my plan sees me running an average of 45 miles a week, going up to two 65 mile weeks, peaking at 70 miles. Hopefully I can stick to the plan and get the miles on.

So, from now on in, it really is all about the TP100. Although work is busier than it's ever been, I need to try and concentrate on getting ready:- physically, mentally, and doing my shopping to get my kit together. I'd been planning to run in my Salomon Speedcross, but found a hole in them this morning - need to buy some new ones pretty quickly so I can get comfortable in them before the race - and I still don't have a waterproof coat I'm happy with, or a solution for my Garmin lasting the whole race, or my headtorch lasting the whole night. As you can see, lots to think about and sort still, but although there are some nerves already, they're very much in the back of my mind. On the whole, I'm already very excited.
at 18:55 3 comments:

On Wednesday I saw a Facebook message about there being spare places in this weekend's double marathon, The Martello, which is a new race, organised by running legend Traviss Wilcox and his family, who put on the ever-awesome Saxon Shore marathon. I knew lots of friends were due to run, and had originally wanted to take part, but both days had sold out so I jumped at the chance to take one of the spare places. I picked Saturday's marathon, as the weather was due to be nicer on the Sunday, and knew I would use the weather on Saturday as an excuse to sit on the sofa all day if I didn't have somewhere to be!

The forecast was for 40mph winds in Folkestone, but even knowing that, I didn't have any idea of what I'd let myself in for! This is my facebook post from yesterday afternoon once I got home:

"Marathon #42 - done, along the seawall in Folkestone.
It was epic and brutal and I'm proud of my sub 5 hour run when 13 miles of it was into headwinds of 30/40/50+mph which made standing up a challenge at times, never mind running. The rain storms didn't help & at one point it was like armageddon when the sky darkened with the wind, the rain, the hail and the sand was being blown around so strongly I could barely see and had to hold onto a bench for peace of mind.
However, at other times, the sky was blue, the sun shone, the sea was spectacular, and the wind was at my back blowing me along, and all day, there were lots of friends there to share the experience with, which made it a brilliant, if insane, day out at the seaside " 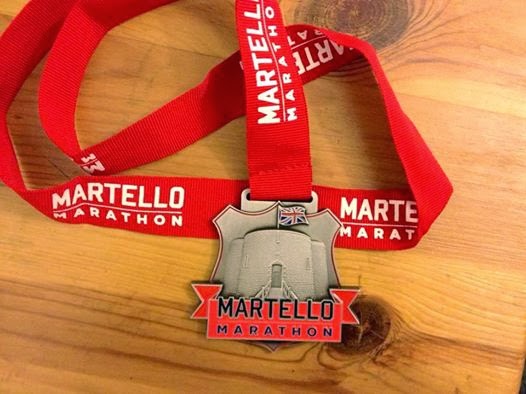 Everyone was saying that it was one of the toughest marathons they'd ever run. It was totally flat, all on the tarmacked sea-wall path (except where the shingle from the beach had been thrown up across the path by the waves) but the conditions really were incredible. Trying to run into such a strong head wind was ridiculous - it was like running on the spot sometimes, but with back bent over, to try and get some forward motion. It only happened a couple of times but getting hit in the head by flying shingle wasn't too great either ;)

However, despite all of the challenges,  I'm so glad that I chose the Saturday rather than the Sunday to run. I know that yesterday's marathon will go down as a special one, and I'm proud to be able to say, yes, I was there, and I finished.

XNRG's Pilgrim Challenge was as much fun as I'd expected. As over a week has now passed since I crossed the finish line, I've forgotten most of the details of the weekend but I do remember how much I enjoyed myself, how beautiful this section of the North Downs Way is, and how friendly everyone was. It was great to meet some facebook and twitter friends in person for the first time too (the awesome Kelvin, Susie, Shaun and Marc) as well as briefly catching up with the incredible Allan Rumbles who was marshalling.

We were lucky to have pretty much perfect conditions (when you consider how atrocious it could have been given recent weather) and on the Saturday morning, we set off across boggy fields, under beautiful blue skies and sunshine, although you could hear everyone laughing or groaning after the first 20 yards as we all got trainers full of water...a sign of things to come! 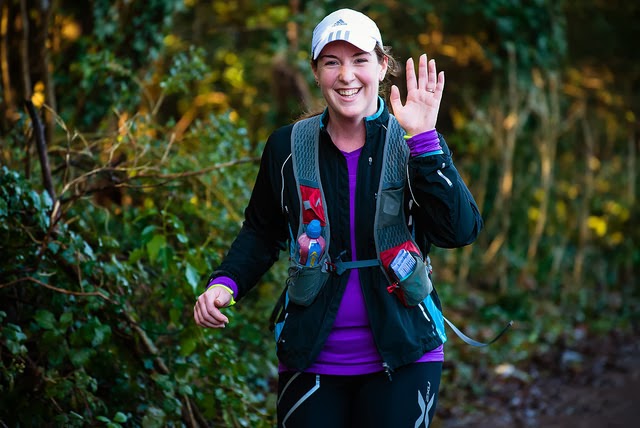 The countryside was absolutely stunning, everyone seemed in good spirits, and it was rare that I was running without others at least in sight throughout both days, although even if I had been running solo, there would have been no need to worry about navigating. XNRG are, without a doubt, the best at sorting out an easy to follow route - there were loads of official NDW acorns to follow, but anywhere there was the slightest doubt, there were orange arrows sprayed onto trees or the path. The only time a big group of us went wrong was when one of the many trees that had fallen in the recent storms, had dropped directly over the path at a junction with another path, in such a way that it obscured the correct route and made it seem obviously that we should all take a right, instead of going straight on....On encountering a dead end after about half a mile through the wood, we turned back and soon realised our mistake. 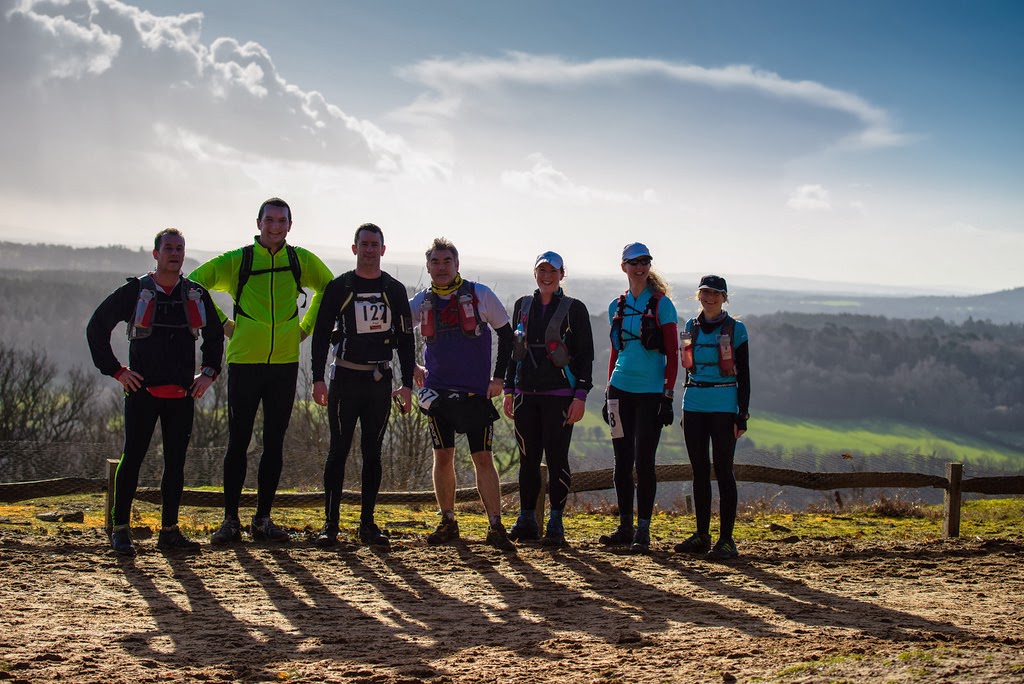 The conditions underfoot were often challenging - there was lots of sections of incredibly deep and squelchy mud, others where it was very slippery, and then there were the bits where we were wading through deep water, but it was all great fun and I think everyone took the conditions in good humour. The XNRG team had to reroute the course on both days to avoid flooding that had happened overnight, and they did so incredibly efficiently, with it barely affecting the overall distance. 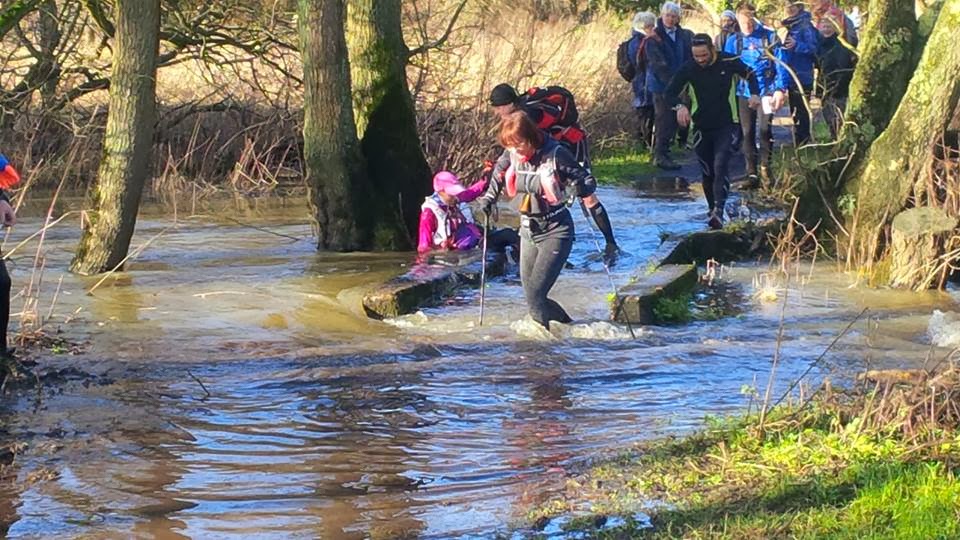 I was quite surprised at how cheery everyone still seemed on the second day, as I don't think any of us had an unbroken night's sleep in the school hall in our sleeping bags.  It was certainly not a comfortable night for me, and I was so tired on Sunday morning but the running seemed to wake us all up pretty quickly! I was really pleased that my legs were still co-operating too, with no particular aches or pains.

The route is incredibly hilly, and felt especially so to me, being used to training in Essex, and my Garmin recorded a total elevation gain of 915m. Clambering up the narrow and very steep chalk path up the side of Box Hill on day one was very hard and I don't think I really recovered my running legs after that. I walked on both days much more than I'd expected to (which I think is why I didn't have any DOMS in the days afterwards) but with the many hills and the mud, I was comfortable with how I was moving forward and just enjoyed myself. 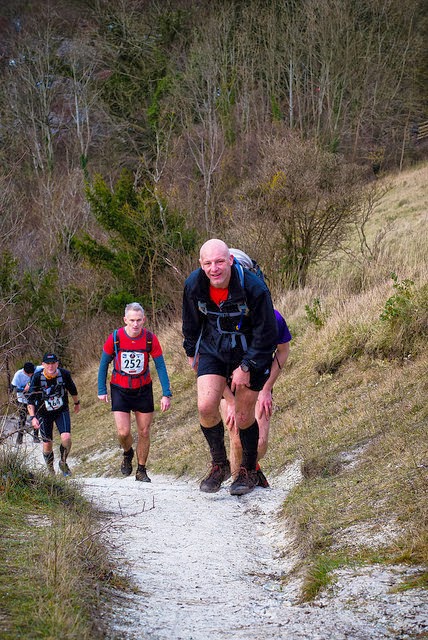 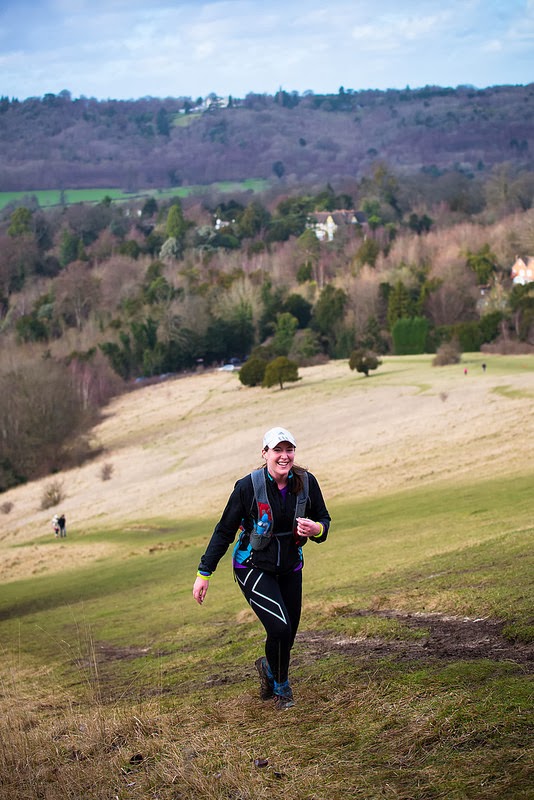 On Sunday, from about mile 18 I surprisingly had a bit of a second wind, that lasted about 10 miles - I just seemed to find a new strength from somewhere and felt that I was flying along, and absolutely loved it. I even discovered a sub 10 minute mile at mile 21 on the second day (so mile 54 of the weekend) whereas I was averaging 12:47min/mile on Saturday and 12:42min/mile on Sunday. 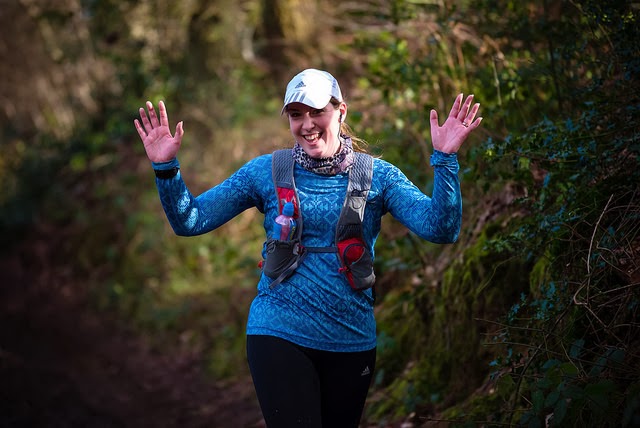 I was so glad that I'd been able to take the car and leave it parked at the start/finish. I couldn't have faced carting my rucksack and sleeping bag back into London then out again on the train, and it was nice to have somewhere other than the ground to sit down and recover ;) There were lots of people who did have to take the train though, but with no showers at the finish I felt for them (and the other passengers who would be sharing the carriages with them!) We were all so incredibly muddy!

I know I walked more than I needed to, doing Pilgrim's, and even stopped to take a few photos, so hope that when I do this again, I'll knock a chunk off my time...it's definitely worth a second attempt, if just for the views!