What an absolutely brilliant day. That sums up my experience of the Stort 30 this year - it was awesome, I loved it and from the various reviews and blogs I've seen from other runners, I think everyone pretty much agrees :)

I arrived in good time at the clubhouse where the race starts in Bishop's Stortford, and said hello to a couple of friends before settling myself in a corner to tape and vaseline my feet...only to be rudely interrupted by a flying banana as my long time mentor Jerry (who was sweeping the course) made his presence known ;)

I chatted with Jerry, and with everyone, about being a bit nervous but looking forward to the run...I think in hindsight there's a part of me that wants to make excuses before a race starts just in case anything does go wrong. I did the same at the St Peter's Way 45 miler earlier in the year, telling people I might drop out at halfway. I have to stop doing this - even when I'm nervous, I must focus on the positives!

Anyway, I think I managed to catch everyone and say hello before Lindley, Race Director at Challenge Running, called us all to the start line to get ready for the off....and then away we went.

Despite there being a much larger field of runners than last year, there was more than enough room for everyone and the pack quickly thinned out as the faster runners pulled away, and we all settled into our places. As I always do, I ran the first mile far too fast, in slightly under 9 minutes (my plan had been to try and run consistent 11 minute miles all the way through plus time at the checkpoints) only having to stop when a gust of wind blew my hat off! I calmed down after that first mile though, and found a more relaxed pace.

I didn't stop at the first checkpoint - we'd been told we didn't have to, I didn't need anything and I knew how much time I'd waste there. So, I carried onto the next checkpoint at 10 miles where I was very pleased to see that one of the marshals was fellow runner and friend, Liz and her lovely husband Albi who is recovering from a stroke - great to see him up and about again.

The course really is lovely. Although I probably missed a lot of it as I spent most of my time looking at the path making sure I knew where my feet were going, the bits I did see were very picturesque ;) I wish I'd taken some photos.

There's a mile of tarmac path to start with until you get to the river, and once you're on the trail course, it's a mix of hard packed trail path, grassy fields, a bit more tarmac and for a few miles, just mud! I was so impressed by how my Salomon Speedcross dealt with the mud - I was incredibly pleased that I'd decided to wear them, along with my Dirty Girl gaiters which worked perfectly. The mud didn't actually seem as deep or a as slippery as last year, but I'm pretty sure my judgement was skewed by the shoes...it just didn't seem that different running over the mud as running the rest of the course. The other difference in the course this year is that Lindley had put lots of route markers (blue paint arrows) down , and so I didn't need to look at the route instructions at all, and was confident of where I was going.

The weather was near perfect. It was a bit blustery...I remember one point where the wind literally blew me hard enough to make me worry I would have ended up in the river had the path not been as wide...but otherwise the temperature was cool, there were periods of sunshine and blue skies and so generally we had great running conditions.

As I got closer to the turn around point (mile 15), I started to get passed by lots of runners on their return trip, and took the opportunity to cheer on everyone I could. I love the camaraderie of the ultras but hope I didn't annoy anyone with my regular "well done" that I shouted out! A particular highlight of that section was being high-fived by Paul Ali as he ran past me...there was a boat load of people on the river just there and I remember thinking, I hope they can see what fun we're having!

I got to 15 miles in decent time and was feeling great. I stopped for a brief chat with fabulous Karen, and made sure I sampled some of her famous baking, before heading back along the way I'd come, still cheering on the other runners making their way down to the turn around. Was great to see Nici, who is a Twitter friend I hadn't met before, who was completing her first ultra and I made sure I cheered her on too. Looking at my Garmin stats, I was averaging just over 10 minute miles .for the first 20 miles of the race, and I really did enjoy pretty much every step of it.

The last 10 miles though were much more of a struggle, and my lack of training started to tell. I suppose I should have taken it slower for the first 20 and tried to be more consistent throughout the race, but I was enjoying myself so I'm not going to regret that. I stopped for ages at the last checkpoint, and the final 6 miles were very hard as I totally lost my focus - my back particularly started to ache, I started walking for long periods of time, stretching, and generally faffing about, instead of running.

Another friend, Rosemary, was running and needs a particular mention - the day before she'd run Beachy Head marathon and she stormed past me at about 28 miles, finishing incredibly strongly - I was very impressed with that.

Eventually I made it to the end where the course takes you along the side of the club house but you then have to run what is quickly becoming a quite infamous lap of the sports field before crossing the finish line. Seriously, having to do that lap is just cruel at the end of 30 miles - it always reminds me of being at school and having to run the 1,500m around the field when I was about 13 which was always torture, and I think it's that memory that makes it feel so tough as opposed to the 30 miles already in my legs! 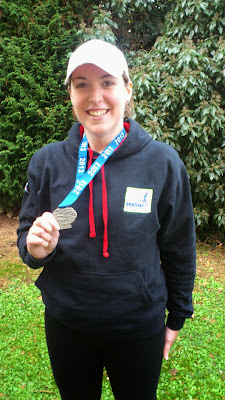 Anyway, race finished, I got the fabulous Stort 30 medal, a technical T-Shirt, and a hug from Karen. If I was disappointed not to get a medal last year, this one definitely made up for it - a replica of a piece of art that is out on the course, totally unique and as good in real life as it had looked on the internet! I love it :D

I was also very pleased to see friends Conrad and Morgan at the end, who had both finished in their target times of sub-5hrs, and also to meet for the first time, Paul (who is running the 10in10 next year), his girlfriend Caroline and friend from Twitter, Dan, if only briefly.

Sue, who's part of Challenge Running, was also taking part in the race and prior to the big day we'd both been bemoaning our lack of training and worrying about how we'd get on - unfortunately Sue suffered with stomach issues, and even threw up but still finished in just under 6 hours - brilliant strength of character to keep going :D

I came across the line in 5:23:59 (against last year's time of 4:57:38) but knowing how well the first 20 miles went, and knowing I'd only had 5 weeks training, I'm really pleased with the result and am taking it as a real positive...especially because I didn't have any trouble with my ankle, and so I am declaring the injury resolved!