Throughout my running career, I've not really embraced the 10km race distance - my first 10km was in July 2010, I ran three of them in 2011, and then just one in 2012, the Billericay Striders race, which starts just 2 miles from my front door - a real bonus and probably the only reason why I signed up.

This year, I seem to have followed the same pattern - the only 10km on my schedule was the Billericay Striders again, which I ran on Sunday. I'm not a huge fan of the route and don't really enjoy the first mile or so (uphill and some of it is single file along the main road) and it could do with a few more road closures throughout but it's well organised and many people do really seem to love it...and it's great that I can run to the race from home and back.

However, the thing I really enjoyed about the Striders 10km this year, was it reminded me what it was like to race. To push myself hard, to pass people, and to put in a level of effort that's very different to the effort I need to run long distances. 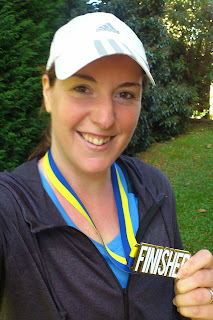 Obviously if I was fitter I could properly race long distances too, but I'm not and I don't - long runs are purely against myself and that's fine, but I enjoyed my legs waking up during the 10km and realising I was meant to actually run rather than plod through.  A short distance race really is a totally different type of event to a marathon or ultra and I was surprised that I enjoyed that difference so much.

I know I'm not as fast as I once was...my PB marathon pace from last year was only a bit slower than my average pace for the 10km....but that's because I haven't done any speedwork for absolutely ages, and I'm heavier these days, but it doesn't change how much fun it was to feel a bit speedier than usual! I'm thinking that although I'm concentrating on my endurance and getting miles in my legs in preparation for the longer races I've got coming up, it wouldn't hurt to include some speedwork in my training again, or to sign up for a few more 10km events.

P.S - Last year, we got a pen for a memento of the race, so I was very pleased with this year's lovely medal :)