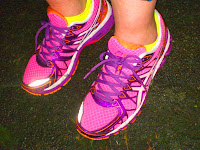 I've been really enthusiastic about my running this week - I've been enjoying my training and my diet has been good too. Despite what everyone probably thinks, I've not had any new road shoes since May, and so I've bought some new ones (these lovely Kayano 20s) and I even went for a morning and evening run for Wednesday . Happy days!

As a result, I've been reviewing my plan that's going to prepare me for the Thames Path 100 as it's starting to feel a little bit more real now. I've realised that the massive number of long runs I have scheduled during training is going to be a nightmare to try and do on my own - I'm sure that as I get tired and life starts in get in the way, I'll be easily swayed from my schedule. So, I've booked in a few more events so I can get some long runs done with other people, and with a bit of bling encouragement  - if there's a medal at the end of it, I'll be there ;)

So...which races have I got booked in? All of these ones:

Not all of them are strictly part of the training schedule - for instance the Brentwood Half Marathon was my first ever race and is local for me, and so decided it was just one I wanted to do this year. To make it into something a bit more useful, I'll run to and from the race.

I only booked the two back to back races this week, and am really looking forward to them. XNRG put them both on...the same people who arranged The Toad that I did last year (90 miles in 3 days) which was such a success. Ideally I'd get a few more races in the schedule but there just aren't that many others that I've been able to find that work logistically...and I need to try and balance it with home life too so this will probably have to do.

There is a part of me that's a bit nervous about the races I've got booked though. I always run harder during an event than in a training run, and I'm really not as fit as I was this time last year - but there's only one way to improve that and it's running more so I'm sure things will work out ;) The Cotswold Challenge in April is one I'm particularly worried about - it's very hilly (2750m of ascent) and I'm really not great  at climbing - but if everything comes together by April it should be more than achievable. Let's hope so, because if I'm not strong enough to run 27 and 30 milers on consecutive days, regardless of how hilly they are, I'll have no chance of finishing the TP100 ;)