Getting ready for the next race

It's been a fortnight since my hyperbolic and overly enthusiastic blog post about inspiration and my return to running....so how am I doing now? Well, actually, pretty well.

My run streak didn't last - I got to 20 days and 116 miles and decided that the extreme tightness in my leg muscles and 24/7 pain from rapidly developing shin splints wasn't worth the glory of a streak, and so took a couple of days off. It was a good decision, and I came back to training physically refreshed. Although I wasn't waxing quite as lyrically about every run after the streak ended, and I've had a few real shockers, I'm still pleased with my progress and in the last month (since 23rd September when I started running again) have racked up 162 miles.

I think that the change in my mood has come about because for the first few weeks of my return, it was all about rediscovering my love for the trails, but recently my focus has changed as I've been starting to prepare for my next race, the Stort 30, which is this weekend. The race is organised by Challenge Running and it's an out and back along the River Stort in Essex, starting from Bishop's Stortford. I absolutely loved it last year, especially as I managed to finish as first lady - I was lucky that it was a very small field (it was the inaugural event) and an excellent female runner who was meant to be coming didn't turn up! ;)

The route is mostly trail, along some some pretty countryside, and the support from Challenge Running is excellent - the only downside last year was the section that was incredibly muddy...and I'd turned up in road shoes. How I didn't end up on the floor or in the river was a miracle ;) This year, I will be in trail shoes, probably my Salomon Speedcross.

I'm really looking forward to the race, particularly because a lot of friends are going to be there and it'll be lovely to see people, in person, who most of the time I only talk to online. The problem is that I'm going to be attempting to run 30 miles with just 5 weeks of training in my legs! But that's ok - I've resigned myself to the fact that I'm going to be way off last year's time, and my sole aim is to finish...but I'm also realistic that just finishing 30 miles on so little training is going to be painful, and very hard work.

I've done two long runs over the last two weeks, both of 19 miles. Both were much more difficult than I ever expected a 19 mile run to be. My ankle hurt, my knees hurt, and I even found my mental strength waning, especially as the weather was atrocious for both of them. I'm just starting to appreciate how very fit and focused I must have been this time last year, and in the run up to the 10in10. I had no idea and it makes me a bit sad that I've lost that level of endurance, strength and psychological resolve! Determined to get them back...although obviously that's not going to happen by Sunday ;)

Anyway, for my taper week, I had a speedy 5 miler last night, ran a slow 6 miles this morning before work, and I've got a massage booked for this afternoon. If I thought my 19 mile training runs were painful, I have a feeling my massage will give me a new sense of perspective! To round off the week, on Friday I'm taking part in a Poppy Run - a 5km charity run around Battersea Park, in aid of the Poppy Appeal for the British Legion, and then it's the big day on Sunday. 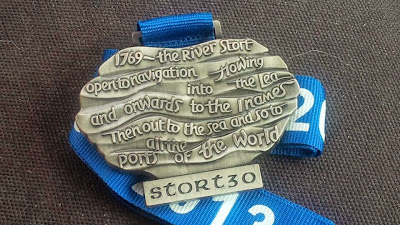 The next time you'll hear from me, I'll either be in pieces because my ankle didn't hold out in the race, because I didn't make the cut off time, or some other disaster befell me (like slipping on the muddy river bank and falling in the water maybe!) or absolutely over the moon because I'll have done it - I'll have finished and will be the owner of one of these: the fabulous 2013 Stort 30 medal!

I'm still maintaining my run-streak. I didn't plan to, and I'm not thinking about how long it'll continue, but I just seem to keep going out for a run. Today was day 14. I don't always run very far, (I've done a couple of 2 milers) but I am absolutely loving it. I'm starting to feel fitter, and am taking the opportunity to discover new paths and explore woodland I haven't run through before, even though I've lived here for over 4 years now! Most surprisingly, I've also embraced early morning running...getting my runs done before work and not having to worry about it late at night when I'm starting to get comfy on the sofa has been wonderful and seeing the sunrise is a spectacular start to the day. 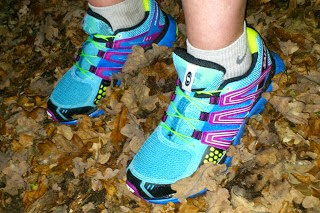 I've also bought some new Salomon XR Missions which I'm just getting used to - I'll do a review on the fit and ride of them at some point, but at the moment I think they're the most beautiful shoes I've ever owned...although it wont be long before they're covered in mud ;) There is definitely motivation to be found in new gear!


To add to my recent enthusiasm, on Monday evening, I got some extra inspiration from attending an interview, Q&A and then book signing with Scott Jurek, who is one of my ultra-running heroes...I've read his book "Eat and Run" a few times and have an interview he did in Time magazine pinned by my desk, which I look at most days. So, after work, I joined a small audience gathered at the Bloomsbury Institute, and waited expectantly....before too long, we were joined by the man himself, and his interviewer, Richard Moore. It was great to be in the same room as Jurek and listen to him talking about his experiences growing up and becoming a runner, although a lot of the interview just went over things in his book. The Q&A was where it got really interesting, where Jurek gave advice, and talked about all sorts of different (ultra running related) topics - what he thinks about up-and-coming runners, the barefoot craze, why he lives in Boulder, how he fuels through a race - all sorts of things. At the end of the talk, Jurek hung around for ages, signing copies of his book...we could either buy a copy there, or he would sign our own, which is a good job because I think 9/10 people had well-thumbed copies they pulled out of their bags!

I was surprised at how nervous I was as my turn came to shake the legendary Scott Jurek's hand, pass him my book, and exchange a few words. I mentioned I was training for my first 100 miler, but to be honest I can't really remember else what we said - I just vividly recall walking away with a stupid grin on my face.

Here's my signed copy of Eat and Run which I'll treasure... I think Dig Deep might become a new mantra! 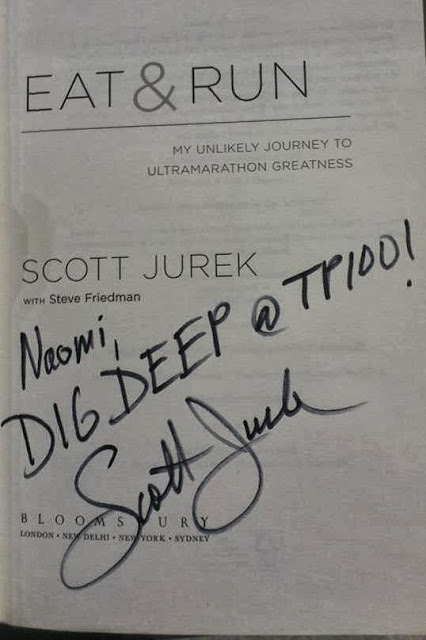 It was like someone flicked a switch in my brain and turned my running mojo back on, and now I can feel it coursing through my veins.

After months of really not being into this running lark at all and struggling to successfully recover from my ankle injury, I woke up on Thursday last week at 6am, and completely out of the blue, went for a seven mile run. I’ve followed that up with an early morning run every day since then; today was day 7 of this totally unexpected and unplanned run streak and I’ve clocked up a respectable 36.5 miles.  This is from someone who for years has generally trained at 10pm at night, and I was so useless at dragging myself from my bed before work! I’ve had a look through my training spreadsheets – I haven’t done this sort of training mileage in 7 days (without including race mileage) since June 2012!

For some reason, getting up early hasn’t felt like a chore this past week, and I’ve been rewarded with some beautiful sun rises. It’s been a pleasure to be out in the countryside, running through the woods and fields at dawn, and even the tarmac sections of my runs through town didn't feel too dull ;) Today was a little different as it was my first run in torrential rain – but I still headed out into the cold and dark morning, and ran the route through the woods that I’d planned, splashing through the puddles as I went.

It’s just an incredible change in me. If I were religious, which I'm not, I’d think it was miraculous…

I’m feeling fitter with every run, mixing up my pace, I’m losing some of the weight I’ve gained over the last few months, and generally loving being a runner again. Is it too “hippie” to say I’ve found myself? Probably, but on some level it does feel true.

I don’t know if this new found enthusiasm will last, or if my body will cope with a runstreak, but while I’m feeling this good about training, I’m going to embrace it.

Ultra runner and full member of the 100 Marathon Club. Trying to find time to run as a working mum of three children under four.