Running in the Grand Canyon

So...the Grand Canyon. One of the Seven Wonders of the World and on 29th August, I was lucky enough to go for a run there! I had been excited about this part of our holiday for weeks before we went - I may have lost most of my fitness, but running in the Grand Canyon was something I definitely wanted to do regardless, a real once in a lifetime opportunity....and it was EPIC!

We drove from Las Vegas, where we'd spent the first few days of our holiday, and arrived at the South rim of the Grand Canyon in the dark, and checked into the Kachina Lodge where we were staying for the night. There were some enormous, antlered wild elk wandering around in the grounds of the hotel which was a bit disconcerting, and the sky was incredible - pitch black and more stars than I think I've probably ever seen above me...but as for the Canyon, it was invisible and so we were both really looking forward to the dawn.

We set the alarm early, and so were up before it was really light.  We opened the curtains and were amazed at the view...we really were staying right on the edge - it was absolutely incredible!

I wanted to get my run finished before it got too hot...I wasn't planning anything long but knew in the heat of the day it would still be almost impossible! We'd read the information that had been left in our room about the various hiking routes into and around the Canyon, and they all stressed just how difficult it was going into (and more particularly, getting out of, the Canyon), and that hikers should be realistic about their fitness levels, aware of the affect of the altitude (7000ft) and be prepared for a very challenging walk....so I carefully decided upon what seemed to be the most achievable, safest route for my run - The Bright Angel Trail. 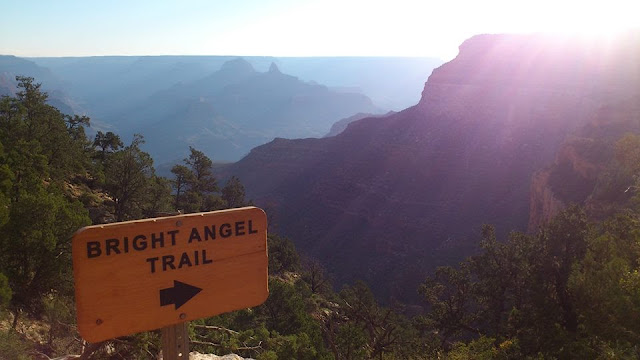 Wiki says: The [Bright Angel Trail] trail was originally built by the Havasupai Native American tribe for access to the perennial water source of present day Garden Creek. The trail originates at the Grand Canyon Village on the south rim of Grand Canyon, descending 4380 feet to the Colorado River. It has an average grade of 10% along its entire length. Grand Canyon National Park categorizes the Bright Angel Trail as a corridor trail. With this designation it receives regular maintenance and patrols by park rangers

Anyway, I got ready quickly and headed out, closely followed by Francis who was planning to take some photos in the early morning light. The start of the Bright Angel Trail was closer to our hotel that I had hoped, but I did at least get a few minutes running along the flat before I started my descent! 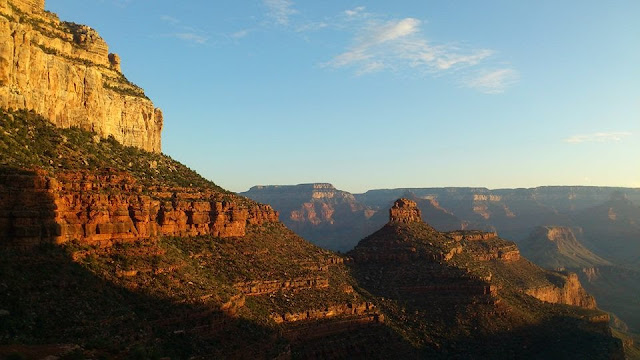 When I got onto the trail, I think I was smiling with every step. The path was steep enough to be easy but still very controlled as I ran down, rough and technical enough to feel like I was really trail running, but maintained enough to be relatively safe as long as I paid enough attention, and the views were just unlike anything I have ever experienced.  The temperature at dawn was perfect too. I passed a few other walkers but not too many, and felt relatively alone, and at one with the view...except for the odd chipmunk I disturbed. I took loads of photos with my phone. Unfortunately not many of them came out, but it was wonderful, and if I hadn't kept reminding myself that I would have to run back up this trail, I could have easily carried on down to the river! It was absolutely incredible and a couple of miles that I'll never forget! 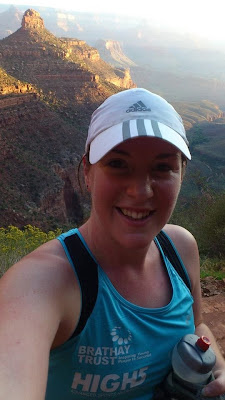 I was sensible though, and very soon decided that I had to turn around to face the hard work of running back up the way I'd come - it's an average of a 10% gradient, and so, by the very law of averages, some of it is definitely steeper! It was starting to get a bit warmer too, and sections of the switchbacks were bathed in light as the sun started to rise, so it was decidedly more of a challenge than it had been coming down! The numbers of people walking down the trail were increasing too, with their full trekking outfits and poles - most were absolutely astonished to see a runner in just shorts and vest, and a handheld water bottle! They gave me lots of encouragement though, and all seemed very impressed...except for the two cowboys who passed me on their horses - they didn't seem very impressed, and ignored me as I squeezed myself again the rock so they could safely pass me by. I got the impression they'd rather they didn't have to share the trails with anyone!

As it started to get hotter, and my legs started to feel heavier, I found myself wishing I'd turned back earlier. Before I knew it though, I was on the final stretch of the trail, when as I approached a bend in the path, I was confronted by a small elk having its breakfast! It was only a young one, so I wasn't worried and stopped to watch it for a while, thankful for a legitimate opportunity to rest! I didn't want to disturb it, so when I carried on, I tentatively walked past, slowly making my way around the corner, only to see two much bigger elk blocking the path. This time I was nervous - all of the literature says to be wary of the elk - and I noticed there was a family of walkers on the other side of the path, the other side of the elk, who had also stopped, looking on nervously too! None of us knew what to do, and so just waited, hoping they'd move on.....

Eventually, it became clear that the elk weren't paying us any attention, and if we didn't do something we'd be stood there all day, so I started gradually edging my way towards them. After initially seeming a little startled, the elk went back to their food, and as I came closer, unhurriedly wandered off the narrow path allowing us all to carry on our way.

Unfortunately, I was soon back in the Canyon village, running on the flat path around the top of the rim back to the hotel, wishing that I had in fact gone further along the Bright Angel Trail, so I could have spent more time on my amazing run. It had been a wonderful experience, and if I'd had the whole day to dedicate to running (and was much fitter!), I would definitely have considered running all the way down to the bottom of the Canyon and back up...although a Rim to Rim to Rim trip would be pushing it a bit far ;)

As it was, Francis and I spent the rest of the day walking the trails along the top of the Canyon, and enjoying the views from the edge. I'm just very glad that I had the opportunity to see the Canyon from inside looking up too...and will just ignore the fact that my ankle was problematic for the rest of the week! ;)