Today's my 31st birthday and I've taken the day off work. The weather's awesome at the moment, so I got up early and headed out for a run before it got too hot, which was a good job as I forgot to take a drink with me!

How I ever preferred road running to trails is totally beyond me...this was the best training run I've had in a long time - it was brilliant through the woods. A few times I turned off the main path and to discover new routes and found myself having to jump over fallen trees and make my way across muddy sections which were streams before the weather dried everything up!

I only did about 12 miles as I don't want to push my ankle too much, but I absolutely loved it :D 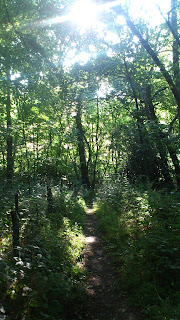 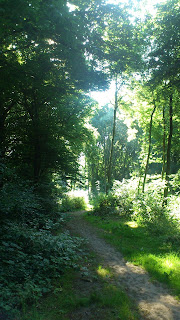 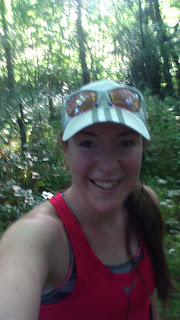 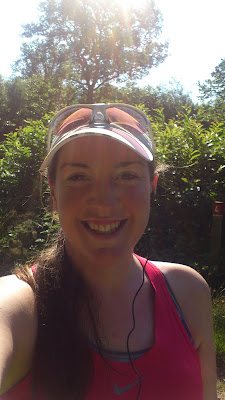 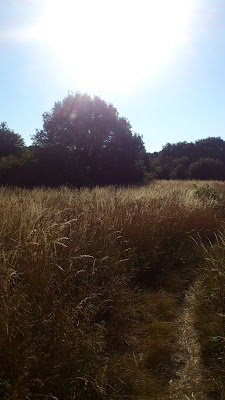 Why it's worth getting up early

I am incredibly bad at getting up in the morning. It's probably because I tend to go to bed so late, so I'm always so tired, but it's also because I love the warmth and cosiness of my duvet!! However, last night was pretty hot, and this morning I found myself awake before the alarm, with the covers kicked off.....

So, what to do?! I decided to get up and go for a run. Most unlike me. 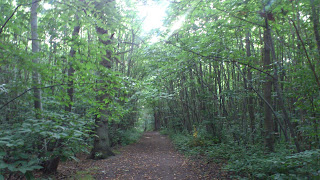 It was a really lovely morning, and although it was pleasantly warm, I didn't need to take a drink with me. I headed up to our local woods, and although there were a few dogwalkers it was pretty deserted. Although I didn't run for long (only clocked up 4 miles) I thoroughly enjoyed it, and found myself wondering why I tend to go out at 10pm when it's dark and I can only run on the pavement when actually I could run through the trees every morning in the sunshine! I should be making the most of summer mornings while they last.

I stopped to take a few pictures while I was out though, and realised one of the bad things about daylight running - there were so many mostiquitoes - I got eaten alive!

A great way to start the day though and must make the effort to do it more often. 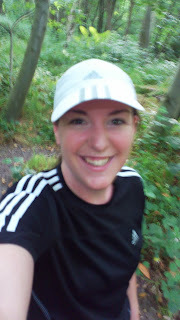 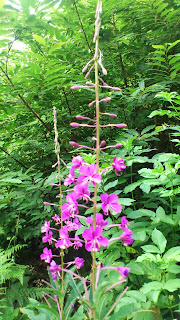 I came across a new Oatmeal cartoon on Facebook, by Matthew Inman, about why he runs ultras.

This is exactly why I run too so I loved reading it and thought I'd share. Click through below to view the cartoon - it's well worth it :)

A few weeks ago now, I was asked if I’d like to be involved in an awesome organisation called LUTA Sportswear …they’re a company that donates half of their profits to a sister charity called Fight for Peace that “runs sports and education projects for young people in communities affected by crime and violence”.

To be honest, I’d never heard of them before, but after my experience with Brathay, I really have realised just how important this type of charity support can be, and jumped at the chance to be involved, to try out their kit, and to help get the word out…..but because I’ve been a bit in the doldrums as I comeback from injury, it didn’t really feel like the right time. But now I’m starting to get back to normal, I wanted to let you know about them.

In 2000 a small boxing club in Rio de Janeiro named Luta Pela Paz (Fight for Peace) opened its doors in the favela community of Complexo del Marè. It became an immediate outlet for the young people in Rio de Janeiro’s favelas; a place for them to turn their backs on drugs, guns and victimisation. A place set up to develop champions in and out of the ring. LUTA Sportswear was created to support these champions.

Half of LUTA’s profits go to Fight for Peace, a non-profit organisation that uses boxing and martial arts, combined with personal development and education to help realise the potential of young people affected by crime and violence.

Our aim is to bring you quality, high-end, socially responsible sportswear. To do that we have consulted with professional athletes and teamed up with industry-leading sports apparel designers and top performance fabric technicians in order to offer the best products for your regime.
LUTA Sportswear is part of the commitment you have made to yourself. You want to get fighting fit and in doing so, change your life. But – and this is why we are different - you are also changing someone else’s as half our profits go to Fight for Peace.
From its humble roots in the favela, Fight for Peace is a now a global non-profit organisation supporting thousands of young people in communities affected by crime and violence all over the world. Today, Fight for Peace offer their Global Alumni programme that supports local groups (such as non-governmental organisations, schools, youth groups, sports clubs, youth-offender institutions) to implement Fight for Peace's five pillar methodology (boxing & martial arts combined with education, employability, youth leadership and social support services) to better serve the young people in their community.
Fight for Peace works directly with over 2,500 young people per year at its academies in Rio and London and via its Global Alumni programme has supported 27 different organisations in 20 countries. Over the next three years Fight for Peace will train and support 120 organisations across the world helping a total of 70,000 young people.

So – LUTA has sent me a fab bag, information about both them and Fight for Peace, and a technical base layer top to try out. To be honest, because this is a brand I hadn’t heard of and who seem to have been primarily focused on combat sports rather than running, I wasn’t sure what the top was going to be like, but I was actually really impressed when I took it out for a run.
It wicks well but still felt soft and comfortable (including the totally flat seams) it has no labels in stupid places to rub, the shape was good, and the logo on the front stretches really well without distortion (and if you’re a girl you’ll understand what I mean about that….).  So, the kit is great, and although the range isn’t that extensive, it’s well worth checking out (here on their website). It’s a brand that I’ll certainly be proud to wear, especially in the knowledge that half of the profits from everything I buy will go to help these disadvantaged young people!

And so the days roll on, and I slowly get back to normal life after injury.

This weekend just gone, Francis and I went on a thoroughly enjoyable 40 mile bike ride, and on the Saturday I made it to an Engima event – I only ran 7 miles instead of the 56 miles I was entered for….but I’m now pretty much ok with the return from injury because I know that I’m making progress (even if it is very, very gradually) and life feels more normal and I feel more in control. Although I’ve just pulled out of another event (the Challenge Hub 50 mile run down in Kent in a couple of weeks) I’m not as upset about it as I’d expected to be. According to the current training schedule I’m working from, although I’m going to be totally undertrained, I think I might just be ok to give the 100km run a go in September. But if that starts to slip, then I might well start feeling much less cheery about progress ;)

Anyway, today I have another physio appointment.  I am very hopeful that this will be my last for the time being, but we shall see what Tessa says. Experience over the last eight weeks since the 10in10 shows me that I’m very good at ignoring the pain and building up my expectations for recovery, and that once Tessa starts working on my ankle, she very quickly reminds me that it’s not yet healed! We shall see how it goes….

Have you fallen off the wagon?

Below is a fantastic post that I'm sharing from a blog I discovered today called "How not to eat chocolate cake".  The whole blog is like it's been written just for me...but of course it hasn't because so many thousands of people struggle with their relationship with food. I'm going to keep reading the post below until, hopefully, it finally sinks in....

The only time a person EVER “falls off a wagon”
is when there’s a wagon to fall off of;
a set of rules, ideals, or beliefs around food that we let determine how we feel about ourselves.
“I was sooo good with food yesterday, and today, I SUCK.”
sound familiar?
and I’m guessing that when you go into the place of “I suck,”
when you “fall off the wagon,”
you fall hard. Like knee-deep-in-brownie-batter-hard.
Not fun, and so avoidable.
If you want to make peace with food, and stop shame-eating cookies in the middle of the night,
Ask yourself,
what “wagons” am I trying not to fall off of?
Where am I judging my performance with food?
Where did I draw an imaginary line of “not okay?”
AND GET RID OF THAT SHIT.
Because as long as there’s a wagon to fall off of, you WILL fall off of it eventually.
You see,
“Falling off” is not your problem. Your wagon is your problem.