Well, we've got here - today we ran our 9th marathon in 9 days. Unfortunately though only 14 of us made the start line this morning as Phil has had to pull out with a serious injury that he picked up yesterday, resulting in him having to walk pretty much the whole day to finish day 8. Absolute respect to him for getting to that finish line though - I can't begin to imagine how hard that must have been. 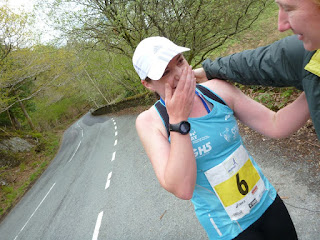 I don't really know what to say...I'm so tired and in so much pain. But yesterday's marathon and today's were made infinitely better as my family and friends have been here to support me - seeing them out on the course made the pain that bit more bearable. Yesterday it was Alice, Cath and their daughter Martha and it was a total surprise - as soon as I saw them by the side of the road I burst into tears (that's the photo) ...it was such a boost though. Today, I've had my husband Francis, my mum, father-in-law and Franc's aunt and uncle out on the road...and they even had an especially made banner, just for me! It was a lovely touch and so nice to see them cheering for me. I also had Steph and Keith, two friends, who had the fantastic idea to blast inspirational running songs on the car stereo when I went past - it was brilliant and made me smile so much.

I was in a lot of pain during today's run, but they helped me through, as did the typically awesome support from the rest of the 10in10 team who have made it possible for me to take each and every step of this journey so far.

Tomorrow, our 10th marathon in 10 days, will be incredible. I'm in no doubt about how much it's going to hurt, but I'm just really pleased that I'm going to be able to share it with my family and friends who have come to support me, as well as with the 10in10 team of 2013...runners and supporters...who I now count as dear friends too.