On Sunday, I ran the Watford Half Marathon, which was the first half I've run since last summer.  I was sure this was a race I'd run before, but on Saturday night I realised that I'd been thinking of a totally different race, and had no idea what it was going to be like, so turned up without any real expectations. 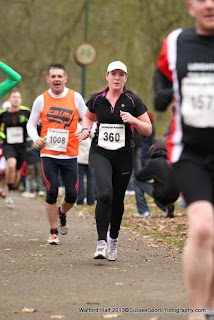 It's a decent enough race, and one I might do again...although not sure how I much I like a half anymore - it's just short enough that I seem to spend half the race warming up and as soon as I hit my stride it's finished ;)

The start (and finish) is in a local park in Watford. Local parking was a bit of a nightmare, but otherwise it was very well organised with changing areas, loads of toilets, efficient baggage drop and even massage available! However, I was totally perturbed by the fact that there were two starting points - one for men, and one for vets and women! What on earth was that about?! Not impressed.  Fair enough have two starts divided by your anticipated finish time but such incredible and blatant sexism and ageism was a surprise.

Anyway, once both groups get going, you spend the first 3 miles running through a housing estate. It's a pretty big race (1699 people finished) and the more of the smaller races I do, the more annoying I find it running in a crowd, and I wasn't impressed with the suburban route - I was starting to get very worried that this was what the whole run was going to be like and that I wouldn't enjoy it. Thankfully though, after those three miles, the rest of the route was lovely and we all started to space out. Running through country lanes that were closed to traffic for the race was an absolute delight - it's been ages since I've run on traffic free roads in a race! Then the last couple of miles were through a track in the woods which was fantastic. 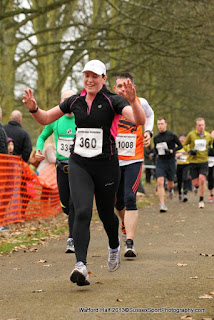 There are a few challenging hills on the course, but as I ran them, I just kept thinking about how much hillier it is at Windermere and that kept me going and was pleased not to stop. I had decided to try and run at 9 min/miles and when I started, and found myself running at about 8min/miles so quickly reined myself in and slowed down as I didn't want to blow up later. As it turned out, this was very effective, as towards the mid-way point, once I was warmed up, I still felt really strong, and reminded myself just how much fun it was to run fast! Seeing 7min/mile pace on my watch always really makes me smile!! :D

I certainly didn't maintain that though, especially with the uphills, but was happy with my average pace of 8:45min/mile, giving me a chip finish time of 1:55:32. I'd been aiming for a sub 2hr training run and it worked out well - 7 minutes off a PB time but more than enough for how things are going at the moment! However, the one thing I was moaning about on Sunday, and that I'm still a bit annoyed about, is not getting a medal. For £20 entry fee, I honestly think there should be a medal for the finishers - I don't need t-shirts that I'll never wear - I want a medal to hang up in the hall! Oh well....mustn't grumble.... 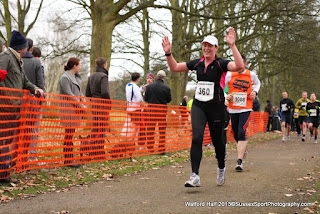 Next up is the Braintree Boggle Marathon on Sunday which is going to be an entirely different race. Only about 100 of us I think, all cross country trail and probably very muddy, and we get route instructions when we pick up our numbers.  This only cost £8 to enter, so I'm not going to moan about not getting  a medal for this one...assuming I actually finish it! ;)