On Saturday, Francis and I had a day out in London...leaving home before 9am, we went to the London Aquarium (which is fantastic) where we went on a "behind the scenes" tour, and then Francis went snorkelling with the sharks which was part of his Christmas present.

We found a restaurant for lunch, wandered along Southbank and then returned to the Aquarium, seeing everything but paying particularly attention to the adorable penguins they now have! We left with a renewed enthusiasm for going scuba diving again soon, and finally setting up our home aquarium. We got home at about 6pm - I'd spent all day on my feet but really enjoyed myself.

That evening, about 8pm, we were slumped on the sofa watching TV - I was also on the laptop, looking at Facebook.  I noticed a message posted by Foxy from Enigma Running asking if anyone wanted to run a marathon the next day as he had a spare place in the Enigma Winter Marathon in Milton Keynes.

Now I realise that any normal person, having put on half a stone over Christmas and not having exercised as much as they should have done, and generally feeling tired after a day out, would have thought running a marathon on an evening's notice wasn't the most clever thing to do. However, I appear to have become a fully fledged marathon nutcase and as we didn't really have any plans for Sunday and my schedule said I had to run 15 miles anyway, I thought that an extra 11 wouldn't be too much of a stretch. There seemed to be a fair few people I knew already running the marathon, and so without really thinking about it, gleefully took the place.

After sitting around on the sofa for a bit more, I realised that this actually meant I had to run 26.2 miles in about 12 hours time, and I should probably get ready! Last time I tried going to an Engima marathon, I forgot my trainers, and knew there would be absolutely no way of living it down if I managed that twice....

So, I pulled my stuff together, had a pint of water to try and make up for the lack of hydration during the day, and headed to bed early.

The day of the marathon dawned, I headed out into a very foggy morning, and drove over to Milton Keynes, feeling somewhat surprised at this turn of events, and wondering what on earth was I doing! By the time I got there though I was a bit more relaxed about the prospect, especially after seeing lots of familiar faces within minutes of arriving :D 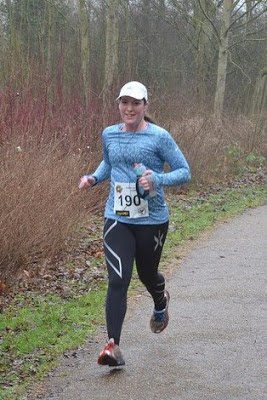 I've run the course before, at the Enigma 30 miler I did back in July, and I think it helped to know what to expect, but I found the 7.5 laps of Caldecotte Lake hard going psychologically, although physically I wasn't too bad at all.  I just couldn't really get my head together and in the later laps, kept finding myself walking when I didn't need to. I also got incredibly hungry at about mile 14 and then later again - I was very lucky that there was food at the aid station otherwise I think I probably would have hit the wall, which is something that hasn't happened in years, but which was obviously just a result of the inevitable lack of preparation. My official time was 4:19:36, although my watch did clock 26.78 miles so it seems I travelled a bit further than I needed to which added just over 6 minutes to my final time but regardless of that, this was still my slowest marathon for over a year and a half!

It was a lovely out there though, really nice to catch up with people, and I thoroughly enjoyed the day, so am glad I took the place. Best news of all though is that my hip was pretty much fine and even this morning is feeling much better than it has in ages - I definitely just need to keep running more! :D