Yesterday, I ran my 21st (and last) race of the year, the Buntingford Year End 10 Miler. It was my second time at the event, which is a relatively hilly, looped course around a bit of housing estate and then the Hertfordshire country lanes. 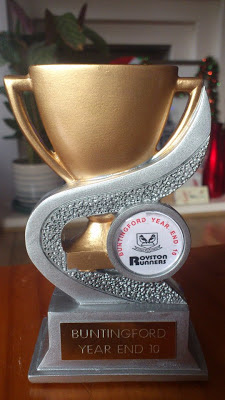 It's pretty well organised, and although it was a bit cold, for a December run we were really lucky with the weather. I didn't know how I was going to get on, but as it turned out, my lack of recent mileage was very obvious (as was my lack of speedwork since the spring) and I found it more challenging than expected, adding about 5 minutes to last year's time, finishing in a gun time of 1:28:14. However, my slower time wasn't just as a result of poor training - I was definitely hampered by the excruciating pain that returned in my hip for the last couple of miles! :(

The finish time recorded on my (brand new Christmas present) Garmin 610 was 1:27:57 over 10.1 miles, and I was particularly pleased with mile 7 which I ran in 8:04 but regardless of times, it was a great race to kick me back into serious training, what with the 10in10 just 19 weeks away!!

I expect I'll be back to have another go at this race at the end of 2013, not only because it's nice to have a race over Christmas, but also because of the amazing memento everyone gets for finishing..

Last year we were given a silver shoe, and the photo is of the trophy we all received this year! It does seem a bit excessive for a 10 mile race, but I'm taking it as a trophy to celebrate the whole year's achievement, and following on from my last blog post, I'm going to let myself accept it as well deserved.