I'm still on a bit of a high after yesterday's Saxon Shore Marathon, which may well put a bias on anything I write about it, but it was sooooo very good. I had a fantastic day, in many ways, and really enjoyed myself - this is what running marathons for fun is all about.  This was my 12th marathon of 2012, and my 17th overall (including the ultras) and my 42nd race of any distance. Although it was bitterly cold (I really felt for the marshals having to be out in such wintery temperatures) and I had to get up at 5am to arrive on time, I can't remember running a race I've enjoyed more.
It felt like a community run - everyone seemed to know other people there (as I did) which definitely makes a difference and we were all waving and smiling as we passed each other along the route (although towards the end this was much more subdued!), and it was so relaxed. I just loved how friendly the atmosphere was.

The marshals were limited to Traviss Willcox (world record holder for number of marathons run in one year) who puts on the race, his family (Rachel and Elanor) and Karen, RD for Enigma Running, and marathon supporter extrordinaire...lots of people stayed over at Karen's the night before rather than staying in a hotel and she made everyone who wanted one bacon butties for before or after the race!.

The course was very simple...out and back four times along the sea wall, starting at the aid station which was in the sand dunes (thankfully which have been covered in grass over the years). We ran a mile on the sand-dunes, a mile on the sea wall path, which was covered in loose stones or "shingle, ruts and rock" as described by another runner, Lisa, and which was pretty difficult and a bit painful to run on (wish I'd had trail shoes) through a kissing gate, and then a mile on tarmac, before getting to a gate marking the entrance to the golf club, where we turned round and ran back to the aid station. That's it. But it wasn't boring at all - on one side was the beautiful coastal view and in the early part of the morning, the sun coming up over the sea created the most beautiful reflections and it made it feel like I was on holiday somewhere, and on the other side of the path were fields, the golf course, or the most enormous houses. The varying terrain was also great as although at the time I was cursing the section with the stones it was great to have the next section to aim for, and it really broke down the distance, making the four hours pass very quickly.

Towards the end, a guy that I'd been running within a few minutes of, throughout the race, was walking, having problems with his knee. We'd been at the aid station together earlier on (when I stopped for a couple of minutes because there was so much food and friendly chat I just couldn't run straight on past) and found out he was trying to get a PB of sub 4:14.  We ran together for the last mile and a half or so, with me encouraging him (I hope it didn't come across as yelling) to keep going as we were going to get a sub 4:10 if he stayed with me. We stormed that last section, and our official finish time was 4:08:53 - am so pleased for him that he got the PB he really wanted and I was able to help him to it! I'm pretty pleased with the time too, my third fastest ever, although still 20 minutes off my PB...but then that seems to be the effect of running ultras and I'll never regret those.

Anyway, comparing my races photos from the Luton Marathon a couple of weeks ago with the photos from Saxon Shore is interesting...I look so happy in all of the pictures from yesterday!! I suppose it helped that despite a few twinges, my hip is pretty much back to normal, so I wasn't dealing with the pain on every step, as well as thoroughly enjoying this marathon so much more. 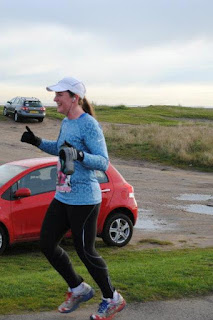 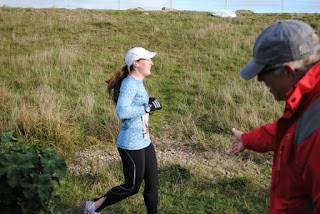 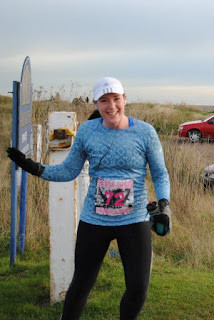 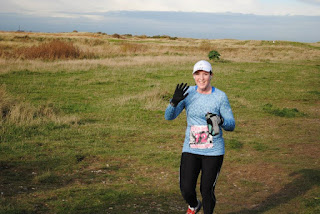 Special mention also needs to be made of the medal and the goody-bag which is without doubt the best I've ever had. Travis has said that he tries to make the Saxon Shore Marathon like his ideal race...he's run so many, I guess he knows all the things that are the most important to a runner, even down to Elenar putting the medal over my neck when I'd finished, rather than handing it to me...it's the little touches that made it special.