Respect the distance: the rules of marathon running

There's a lot of advice and information available out there on how to run a marathon.  Over the last few years, based on what I've read in magazines, on-line, and from my own experience, I know the rules I need to follow to run my best race, aside from (obviously) putting the miles in during training.  Unfortunately, yesterday, running my 34th race, and my 11th of marathon/ultra distance, I managed to break pretty much all of those rules, and definitely paid for it! 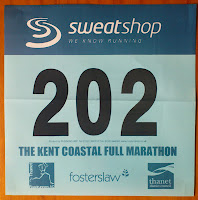 I was running the Kent Coastal Marathon, which is a friendly, picturesque and well organised race along the sea front and cliff path around Margate. Although I knew it'd be hard work, and didn't expect a particularly fast time, as my training has been a little sporadic recently, and I hadn't tapered at all, I ended up having a much more difficult race than I'd hoped for, and unfortunately it's all my own fault.
So, the rules....


Carb-load before a race
Although I was trying to carb-load in a sensible, healthy way instead of my usual, disordered, "eat as much junk as I can" way, I really didn't get the balance right.  Too obsessed at the moment about not eating too much, and trying to lose weight, I didn't start changing my diet for carb-loading until Friday, and even then didn't eat enough calories. After a pasta meal I was still hungry when I went to bed on Saturday night - although I got up and had some more to eat, by that stage it was really too late.  I didn't load up sufficiently, and suffered during the race as a result.


Get to the race early 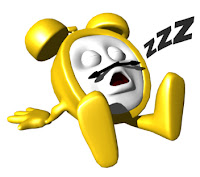 I like to arrive at a race at least an hour before the start time - this gives me enough time to get there if the traffic is bad, or I get lost, to find the start (which is sometimes quite a way away from the parking) to generally get myself together and in the right mind-set, go to the toilet before the queues build up, and spend 15 minutes or so warming up.


Yesterday, I made the fatal mistake of only setting one alarm - it duly went off, I silenced it, and promptly went back to sleep.  When I eventually woke up, I was incredibly late and very thankful that I'd prepared my race bag and kit the night before! By the time I got to the car and turned on the satnav, it told me that my anticipated arrival time at the marathon was 9:35am...five minutes after the start!  This is the sort of thing that I, quite literally, have nightmares about.


At that time on a Sunday morning, it's generally not too difficult to beat the satnav, as the roads are so quiet, so I was determined that I could make it. Not that I'm advocating it, but I drove very much faster than I should have done...and then spotted a policeman hidden by a bridge column on the motorway, with his speed gun pointing straight at me. I was the only one there, so I know he was clocking me, and no doubt there is now a speed ticket winging it's way to me in the post with the first ever points for my license.


By the time I got to Margate, and had parked up (as close to the start line as I could) it was 9:10am.  I had 20 minutes to get vaselined, apply suncream, put on my shoes and socks, try to find a toilet, and head to the start...stressed is not the word!


As a result, I forgot to vaseline everywhere I should have done (hello chaffing!) and have patchy sunburn in the places I missed while putting on the suncream in such haste - as a result I look pretty ridiculous this morning.  Anyway, by some sort of miracle the race director delayed the start for 5 minutes, and I was able to get to a toilet and over to the start line, but with barely a minute to spare!


Stick to your plan
I knew I wasn't in shape to run a sub 4hr race, so was just aiming to beat my time from running this event last year - 4:09 - and planned to run at about 9:20 minutes/mile.  However, when the gun went off, I felt pretty good, and ignoring the plan, ran 9 out of the first 13 miles at sub 9 minutes, with a fastest mile of 8:35.  There's no excuse for this - it's such a rookie mistake - and I paid for it later on in the race, with my pace dropping off dramatically (coinciding with running out of energy from poor carb loading). Obviously, what I should have done was just enjoy feeling strong for the first half of the race, maintaining my planned pace while the course was quite hilly, and then if I still felt good later, try and run a negative split, taking advantage of the flat.


Don't try anything in a race you haven't tried in training
Now this is where it gets really stupid.  I ran with a bottle of High-5 Energy Source drink and a High-5 Energy Plus gel - two supplements I have never tried before. 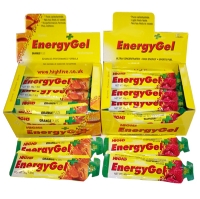 Because it was hot, I was taking water bottles from pretty much every station and forgot to drink a mouthful of the energy drink each mile too, which is how I normally fuel myself - a mouthful of Powerade or Lucozade every mile. I felt ok about my nutrition though, up until about mile 14 when I started to get hungry...which is never a good sign. I realised then that I couldn't have carb-loaded effectively enough and also that I hadn't been drinking enough of the energy drink. So, I started drinking more of that and decided that at the water station after mile 18, I'd try the Energy Plus gel.

When I got there, I picked up a bottle of water in case I needed it to help the gel down, but that meant I had to stop as I didn't have enough hands to carry my bottle, the water bottle, and open/eat the gel.  Such a palaver.  The gel was ok though, didn't taste too sickly, and so I thought it was going to work out well.  A mile or so later, when I had some jellybabies from a marshal, the mixture of the sweets, the drink and the gel made me feel immediately very sick. My stomach didn't settle again until after the end of the race and I couldn't have any more of the Energy Source drink either.


Look after your fellow runners
I'm very pleased to be able to say this isn't a rule I broke, but one that I was really shocked to see other runners ignore.
Not sure where, but I think about mile 20, there was a runner laying, spreadeagled with his eyes closed, in the grass beside the path.  I ran over when I saw him to see if he was ok. Managed to get him talking and he said he was absolutely exhausted.  Someone else (who wasn't in the race) came over just after me and agreed to stay with him, while I ran on to the water station which was only 300 yards up the path, around the corner, where I got a marshal and a first-aider to go back to him.


I can't believe though that I saw other people run past him! Just appalling - no PB run is ever going to be worth leaving someone by the side of the road...although I suppose if you are so commited to your time, the least you should do is tell the next marshal you see that someone's in trouble. Having been at a number of races over the last couple of years where runners have died, this is something which I feel really strongly about.  I didn't have the foresight to note the runner's number, so I can't check if he was ok, but I have been thinking about him.


Don't stop running!
Now, this isn't a rule for everyone, and I know that many people find great marathon success in run/walk methods...but I don't.  I run a marathon best when I keep going. Obviously, with the ultra training and races, I've been doing a lot of run/walking (it's the only way I was ever going to get through 52 miles) but this seems to have have affected my mental strength when it comes to running the whole way through a race.  When it got hard yesterday, I stopped to stretch or to walk, which completely threw me off any rhythm. 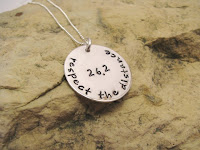 So...I made mistakes and it wasn't a good day.  In light of all of this, I'm lucky to have come out with a 4:10 but the time is a bit irrelevant to be honest - I'm more annoyed that I ran a bad race. In hindsight, I was complacent about the marathon after the ultra, and I broke the biggest rule: