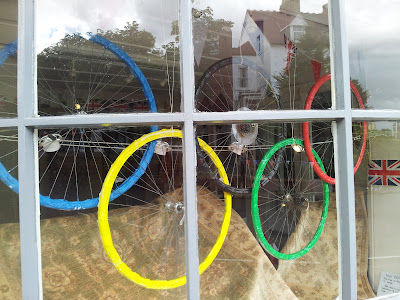 After my 50 miler, I decided to take two weeks off running to really rest-up and make sure my body had a chance to fully recover.  I've had 7 days without doing anything (other than walking and one gym session) and although it's been a bit weird, I've made it through. There have been a couple of frustrated, restless evenings sat on the sofa & there was an extra 2lb showing on the scales this morning, but I do feel pretty good and I don't have any niggles from the ultra, except my very itchy and unattractive peeling sunburn!  But I know I'm not going to be able to make it another week without running, especially with Olympic fever sweeping not only our house, but it seems the whole country! :)


Francis and I were lucky enough to go to the technical rehearsal of the Opening Ceremony on Wednesday in the stadium, which was unbelievably impressive and inevitably much more atmospheric than it seemed when we watched the actual ceremony on TV on Friday night! Still really enjoyed the TV show though and thought the whole event was absolute genius - a fantastic representation of Britishness that I was incredibly proud of, if only through the association of my nationality!
As well as the spectacle that Danny Boyle created, watching the athletes parade was great - naturally, they all looked so enthusiastic and excited to be there - I found it inspiring to see them all.

We were also in London on Saturday for a family lunch to celebrate my 30th Birthday and took a walk along Southbank as my 5 year old niece really wanted to see the Olympic Rings hanging off Tower Bridge that she'd seen on TV. The atmosphere in London was fantastic, and everyone seems very excited about having the Olympics here. 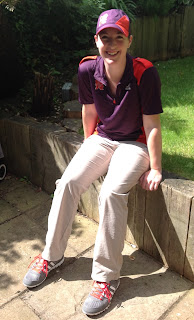 To top it all off, I had my first Games Maker shift yesterday, working at the main Olympic Park which despite my nerves and reservations I really enjoyed - it's not about the job itself, it's just being part of it, and helping to create the almost tangible atmosphere that seems to have taken hold at Stratford.

We've also been watching nothing on TV except sport!  The Olympic athletes are all incredibly inspiring and so tonight I'll go out for my first run and although I'll build up slowly this week, I'm going to start preparing for the next race on the calendar, the Kent Coastal Marathon on 2nd September.  It's a race I really enjoyed last year, and it's organised by the Thanet Road Runners...who were manning the fantastic Jelly Bean Corner at the ultra!

There's not much time between now and then - just five weeks - but I've decided to spend it trying to regain some speed, which I've undoubtedly lost while I was concentrating on preparing my body to be able to run 50 miles! Of course, I'll still make sure sure I get my long runs in (and longer than I usually would for marathon training because I have the Toad coming up too) but I'm going to really concentrate on making my weekday runs count and speedwork and hill repeats are going to reappear on my schedule after going AWOL for the last four months!

I'm quite looking forward to the change and the challenge and although I know it'll be difficult to be so much more disciplined during my runs, it's going to be good for me (will help get those scales down to where they should be!) and will hopefully ensure that I can get a decent time in the marathon.

Last year, I ran the Kent Coastal in 4:09:12 and I know I should be able to run faster that this year.  Although I'll do my best to significantly improve my speed over the next five weeks, this isn't a goal race by any stretch of the imagination and I wont be tapering for it so I shouldn't get my hopes up, but I know in my heart that come race day I'll still be going for sub a 3:50 PB. However unlikely it is that I'll achieve it, I'll aim high anyway - let's just call it a little bit of Olympic spirit rubbing off on me ;)