It's more important than a race 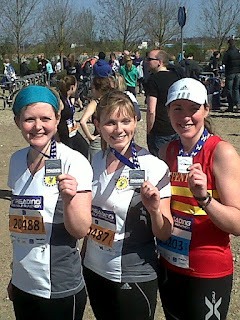 I had a fantastic day at the Reading Half on Sunday and it was an amazing race which I was lucky enough to share with awesome friends, some of whom ran (Vicky and Becca with me here in our "proud medal" photo) and some of whom supported us (the excellent cheer-leading team of Steph, Keith, John and Mark). I've got to say that having friends there made the race much more special for me than most of my others, added to which I also ran a PB of 1:48:08 which I'm over the moon about!

However, when trying to write a race report full of the joys of Reading, I can't fail to feel that it's inappropriate, following the tragic death of Ged Clarke who suffered a cardiac arrest shortly after he crossed the finish line. Ged leaves behind his wife and children and of course it is them who are suffering the most after this, as I know only too well after suddenly losing my dad. However, it's become clear that Ged's death has deeply touched many other people - he was well known (although anonymously) on Twitter as @12pmCLUB where he encouraged people to go out training at lunchtime and to aspire to a healthy lifestyle, and it is clear from the tributes that have been left online that he truely inspired a whole community of runners.

Ged's death comes during the same weekend that the running world heard about the equally tragic loss of Micah True (aka Caballo Blanco) the legendary ultra-marathoner and organiser of the 50miler Copper Canyon race with the Tarahumara people in New Mexico - the star of the Born to Run book - who was found dead after not coming back from a run earlier in the week.

I have tried to write tributes to them both but keep deleting what I've put down - I don't feel qualified really as I didn't know either of them personally. I've also realised that I'm not going to be able to write a proper report about the race, so will instead end my post with a few photos from the finish in Reading's Madejski stadium: a reminder of just how lucky I am to still be running, and just how much I have to be grateful for. 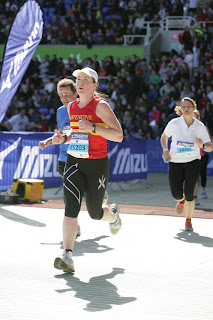