Despite the fact that I was more prepared and better trained for the Brighton Marathon than I have been for the other five marathons I've run before, I have never been more nervous about a race than I was for this one. 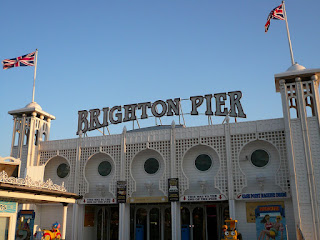 Francis and I went down to Brighton on Saturday, and after checking into the hotel had a lovely afternoon strolling along the pier, and then along the beach and up to the marathon finish line which had already been put up, onto the ice-cream shop (obligatory because we were at the seaside!) and to the pub (although just a shandy for me!).  A few stag and hen parties were already out in full fancy dress but it was all very chilled - I absolutely love the vibe in Brighton!
However, by the time we got to dinner, I wasn't feeling the relaxed atmosphere, was getting pretty stressed about the whole thing, and wasn't looking forward to the race at all.  In fact, I think I could quite easily have jumped in the car and come home! When we got back to the hotel after dinner, I checked out twitter.  WOW! The support from so many people was absolutely overwhelming, wishing me luck, saying they were going to follow my progress on the course through the tracking app, and hoping I was ok.  It was just unbelievable and I'll take this opportunity to say a massive thank-you to my wonderful twitter friends :D

I was still feeling jittery, but knew that I had to go out there and have a good race, not just for me, but for everyone who was supporting me.  I had pretty much lost all confidence that I was going to get my time, and was half expecting to run slower than my PB from last year, but nevertheless, I had to give it my best shot!
--
In hindsight I think I know why I was feeling so nervous.  In the past, I have scrimped on my training plan in the run up to the marathon, and so have known that I couldn't really expect to do well, so there's less pressure.  I've always lived like that - don't try too hard, because if you fail, it's just because you didn't try, not because you can't do it, not because you've failed.  I know it all sounds a bit twisted and is very negative but there you go.... But this time, it was different, this time I had tried.  I had trained hard, put in the effort, and told everyone I was going to run sub 4hrs and I was in the best running form I've ever been in. If I didn't get my time (excepting picking up an injury on the way round) it would be because I just wasn't good enough to do it, and I think that's what was scaring me.
--
Anyway, on Saturday night, I laid all my kit out, set the alarm, and settled down to sleep...before then waking up every 2 hours in anticipation that the alarm wasn't going to go off. 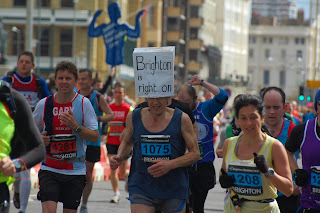 Nevertheless, after my disturbed night's sleep, the alarm did ring out and I jumped out of bed and got ready, jealously leaving Francis at the hotel watching the grand prix. I was still a bag of nerves, and although I was pleased to see that the weather looked pretty perfect for distance running, I was keen to just get the whole thing over with ;) Another check of twitter reminded me that there were lots of people rooting for me, and I headed off for the half hour walk from the hotel to the start, along with streams of other runners leaving their hotels.
After getting to the race, I dropped off my bag (keeping on my charity shop sweatshirt that I would later throw off), gave up on going to the toilet because the queues were so long, and headed to the start corrals.  As I looked around me, I realised that I was stood near the pacer for the sub 4:45 finish time...NOT GOOD! I panicked a little bit and tried to make my way through the crowds of runners to a bit further up towards the start line but it was so busy it was impossible.  I waited until the gun went off and (11 minutes later having crossed the line) started to run my way through the slower paced runners around me.  It wasn't great, dodging between and around people, and I know I must have annoyed lots of runners who were trying to find their pace, and for that I'm really sorry!  At the time though, with my first mile at over 9min/mile pace, I was absolutely cursing the narrow course, the organisers, everything and I'm afraid, everybody... 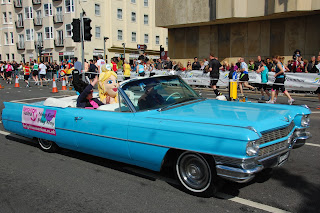 However, as always happens, after a while it all thinned out, and with a few slower miles under my belt I settled into my stride and started to realise how much more comfortable I felt than I had expected.  As I ran, I realised that my nerves had evaporated, and I remembered just how much I love running, and love marathons, with the amazing crowds, the support, the music, and the joint effort - in Brighton, we even got a cavalcade of vintage cars and mod scooters. Wonderful :)

To get my target time I knew I needed to stay just under 9min/miles, so it came as quite a surprise when my average settled at about 8.40, quicker than I'd planned to run. I was worried that I was pushing too hard and I'd be worn out by mile 20, but I made a decision to just go with how I felt and see what happened - at this stage I was much more comfortable running at 8.40 than going slower, and so just stuck to the pace. My splits and details are on my Garmin page if you're interested: Brighton Marathon by naominf at Garmin Connect - Details 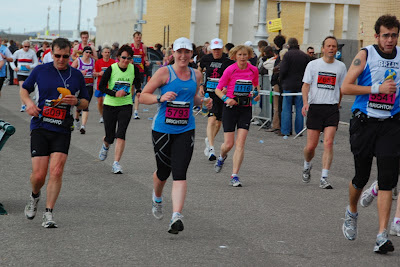 As it turned out the last four miles were hard, but not so bad that I couldn't keep going - I felt pretty strong, I didn't walk or stop once, and although those last four were definitely much slower, by the time I got to the last 600m, with the roars of the tremendous crowds in my ears, I still had enough left for a "sprint" to the finish line!


It meant I'd done enough to finish the Brighton Marathon in a staggering
3 hours 49 minutes and 55 seconds!


This is a PB for me of just under 20 minutes, and nearly an hour faster than I ran the London Marathon, this time last year! I'm still astonished, and so, so happy with it! It was a great day and just goes to show what I can do if I put in the effort - I've had a smile on my face all week, despite the blisters, DOMS and the toenail that I've lost! However, with a couple of out and back loops around cones, the very busy start and running most of the last section around the deserted and dull power station/port/industrial area, there were enough negatives to the race that I wouldn't do it again...although the crowds, running along the sea front and the good organisation (and amazing medal) were all positives great enough that I understand why other people will run the Brighton Marathon year on year.
at 22:22