Just too much running for my knees to take

Last week was due to be my most intense week of training...50 miles were on the schedule including a long run of 24 miles...before starting a three week taper for the Brighton Marathon. However, as with so many things, it didn't quite turn out as I'd hoped for.  50 miles became 36 miles, and my previously working legs seem to have broken down - it was clearly a weeks more heavy training than they could cope with!

I knew I wasn't feeling right, and my knees were starting to complain, so I took an unscheduled rest day on Friday, before going out for my long run on Saturday, although in the end I cut it short from 24 miles to 21 miles.  It was a beautiful sunny day but it wasn't a great run.  Whereas last week I decided to run along a flat (easy) route along our closest canal, this week I decided that I needed to work harder and so ran out from my house. I didn't really plan where I was going to go - I found a few nice country routes, a never-ending housing estate, oh and lots of steep, endless hills! The first three miles were horrendous - for some reason my feet were killing me...then my shins, then my feet again. I kept stopping to readjust shoes, to stretch, just to stop.  However, after about five miles I got into my stride and started feeling much better.  It was only when I got to about eight miles that I realised the route I was taken was much more hilly than my usual runs around where I live, and this wasn't going to be pretty!


Luckily I had money so I was able to buy food and drinks on the way, but I was running slow...which I guess is the point on a long run, but I had really hoped to be able to get closer to marathon pace for the duration.
By the time I got to about 17/18 miles, I was pretty sure I should stop running as my knees were becoming more and more painful, but I kept going, because that's just what you do (as stupid as it may be) - resulting in running the last three miles all over 10min/mile.

By the time I dragged myself through the front door at just over 21 miles, I couldn't really walk. I did lots of icing (my hamstrings, my quads, my calves, my ankles, and most of all knees!) but for the rest of the evening, I had problems standing up, sitting down, and yep still couldn't really walk.  Yesterday was worse...pain not only in my knees but my glutes and hips and generally my legs were really heavy. 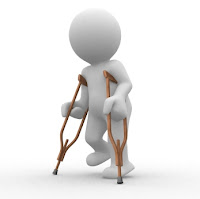 So, not only did I not come close to my 50 miles,  I'm pretty sure I've also ruined my chances of a PB at the Reading Half Marathon this weekend...my knees seem ok today as long as my lower leg only moves forward and backward and I don't sit still for anything more than 30 minutes. If there's any twisting motion, I get shooting pain.  Going up and down stairs isn't great, but manageable.  If I stay still for too long, I seem to seize up. This isn't really the state you need to be in to run a best time at a race in 6 days!

Oh well - looks like my taper is going to start with a few days off, and I'll get a massage (might even see a physio if my knees don't get much better) and see how I feel but either way, I'll still be running Reading - just might be a bit slower than planned!