Combining my run with my evening commute earlier this week actually worked out pretty well, despite the fact that it was absolutely tipping it down and I got drenched!  I ran from one station away from my usual one, and managed to get a 4.5 mile run in without getting home any later than usual! 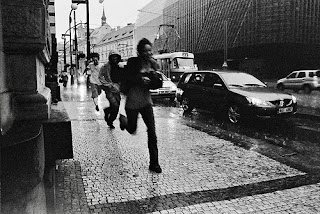 The hydration pouch I used as a rucksack was perfectly comfortable, after a few adjustments, and although I do want to invest in a bigger rucksack,  (maybe about 10litres) so I can my day clothes in there, I think that I can just about get away with the current one until payday and do plan to work the commute run into my regular running schedule.

However, there was one thing that was a bit odd about being a commuter runner....it felt very different, by which I mean, it didn't feel like my usual evening outings, where I get ready at home and head out "for my run".  I was just trying to get home, and certainly didn't feel as focused as I usually do, it was all a bit odd.  However, maybe it was just because it was a new way of getting the miles in, and as it becomes a more frequent part of my training, it'll feel more normal.

From next week, I've scheduled three runs home from the next station away from the house, so rather than 4.5 miles, it'll be 6.5 miles.  Fingers crossed they work out as well :)