Since the Kent Marathon four weeks ago, my running has been ticking over, but I've been enjoying a bit of a rest to be honest, and not being "in training" but I still headed out this morning to take part in the inaugural Blenheim Palace Half Marathon - which is an fundraising event put on by the British Heart Foundation, which is the charity I'm raising money for through my running at the moment - any sponsorship would be very welcome, and you can donate directly the BHF via this link: www.justgiving.com/naomi-runs

We've been having the most ridiculously unseasonal hot weather recently, and Sunday was boiling hot with not a cloud in sight - the bright blue skies set off the Palace and the beautiful grounds to perfection, and the entire route of the race was gorgeous - picture postcard, England at it's best. 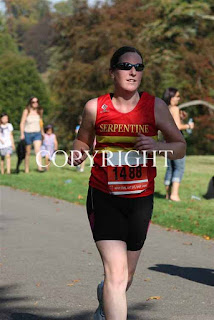 Unfortunately, running in that heat is not much fun, and the race itself was poorly organised (see my review below from the Runners World website) and I didn't enjoy it very much at all.  What added to my bad day was that my Garmin (fully charged up) suddenly gave up on me and would only show a blank screen while I was waiting for the race to start, and in a fit of annoyance and frustration at how incredibly unreliable it always is, I'm ashamed to say I threw it away! Doh!

As always with my races, the first 6 miles were the worst...although this really felt like the hardest 6 miles I've run recently. It was a pretty undulating route, and without my watch I don't know what pace I was doing, but I think I probably went off too hard.  The heat was the killer though.  But, as always, I kept on going, and although at one point had to go and lean against a tree in a bit of shade until the pounding in my head had eased a bit, I managed a relatively respectable 2hrs 4 mins.

My mum, brother and boyfriend all came to support me too, which was really lovely (and unusual) and after the race we went for a pub lunch and the memory of the misery of the run soon abated!

So, I'll go out for a couple of runs over the next few days, but am off on holiday this Friday - three weeks in Madagascar! I'm so excited about it!  I get back on 27th October, and then at the beginning of November I'm going to start training again - I had my rejection magazine from London, so the next marathon is Brighton in April, and then my 50 mile ultra in July!