I may be socially inept but I still want to belong...

A couple of weeks ago I posted about my first visit to, and run with, my local running club, the Billericay Striders.  I said how wonderful it all was, and how I was definitely going to return, and I wanted to join the club.  It's three weeks later now, and I haven't been back. 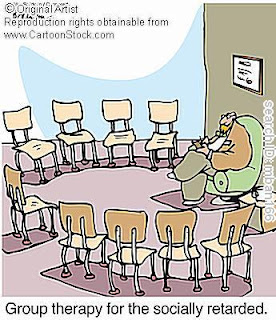 I get home from work too late to ever be able to go out with them on a weekday training run, and it seems that I am too lazy to get up early enough to go out on a Sunday morning...although I know in my heart that this is not the real problem.  The real issue is that although I really enjoyed my run with the Striders, and the other members were really very welcoming, the prospect of going back and having to make small-talk with people I don't really know does fill me with dread.  I know it's the only way to make friends, you know, talking to people, but as bizarre as it may sound to a more sociable person, for me it is very stressful and I always find it difficult - I frequently avoid situations where I have to talk to "new people", in fact whenever I can think up an excuse!

So, I have ruled out going back to the Striders.  After 3 weeks, it has become too much of a big deal in my head, and as much as I want to, I know myself well enough to know that I'm not ready to go to a "real " running club on a regular basis...at least this year....

However, my Purple Patch membership has now expired, and I don't want to renew with them as I don't feel I've really had much benefit from being a member - there wasn't really any contact from them, and most of the races they put on are on the other side of the country.  So, I started doing a lot of research online about other virtual clubs, and what other options I had as someone who didn't necessarily want to regularly run with a group, but did want to belong to a club, so I could remain affiliated, and also have a sense of camaraderie with other runners at races. I still want to be part of a group, even if I can't quite be an active member.  In the end, I came up with joining the Sepentine Running Club who are based in central London.

Serpentine is a massive club, with over 2,000 members.  Although they started as a running club, they now cater for triathletes too, and have many different training sessions across the disciplines.  I always see members from Serpentine at the races I do (never saw another Purple Patch member from one month to the next) which would definitely make me feel more connected, and might even help me talk to other people at events.  Another bonus was that they have midweek runs twenty minutes away from my office, and particularly important for me, they have a fantastic internet presence, with a comprehensive website, online groups (which is a form of communication I can manage) and lots of email contact.  They also offer extras like discounts at London sports shops... they seem to be able to offer me much more than Purple Patch did, or Billericay Striders could, and I have the added option of going running with them after work or at weekends, if I ever decide I'm ready for it.

So, I've now joined them, and just waiting for my membership pack which will be arriving this week.  The next step will then be going along to one of their after work meets, just to pick up my kit, which I'll manage without worrying about it too much - I have a reason for being there, something specific to talk about, easy!  There's no pressure to go back, but I will be a bona fide member, so if I ever feel like it, I can go and run with them...one day...hopefully....maybe!