Can I be a Billericay Strider too?

Last Sunday, I went out for my first run with the local running club, the Billericay Striders.  I wanted to join them about this time last year, but after getting in touch with them, realised that my pace was so slow I would have been so far behind everyone else, I didn't think it was worth it.  However, I've now reached the point where I definitely want to be part of a real club, and start to run with other people (rather than just being a member of my online club (Purple Patch Runners) to get my England Athletics license) and now I think that I'm fit enough to manage it too.  The Striders let you go out with them for a few weeks to see how you like everyone, and feel about the club, before you pay your membership fee, and this was my first meeting with them. 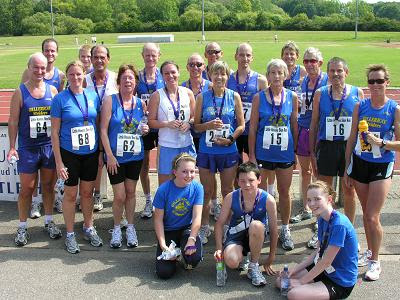 The night before the run, I came so close to deciding not to go along - I'm always very nervous about meeting new people and find the whole process quite stressful.  I really wasn't sure, but after reaching out on Twitter about my nerves, I was convinced to go along, and I came to the conclusion that if there was one group of people I should be able to get along with, it's runners!

I'm really glad I did go. Although it was nerve-racking, and I didn't feel entirely comfortable, everyone was lovely and very welcoming, and it was really nice to feel part of a group.  It's the first time I have ever run with other people, except in a race, and it was such a world away from my runs on my own: they made me keep going rather than keep stopping every time I felt like it, which is so much better for my training.  I had run 16 miles the previous day, and really felt it in my legs so found the 7 miles we ran pretty hard going, and was definitely at the very back of the group, but I don't think it really mattered and was never on my own.

Second only to a race, it just seemed the nicest thing to do on a Sunday morning and I'm definitely going to go back this week.
at 08:52